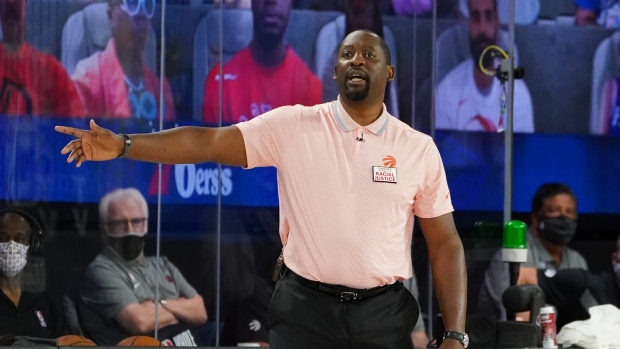 Masai Ujiri might not have any intentions of letting Nick Nurse leave for the Los Angeles Lakers, but Adrian Griffin might be another story.

The Athletic's Shams Charania reports the team has asked the Toronto Raptors permission to speak to their assistant coach about their head coaching vacancy.

Griffin, 47, has been on the Raps' bench for the past four seasons and helped coach the team to the 2019 NBA Championship. Prior to joining the Raptors, Griffin had been an assistant with the Milwaukee Bucks, Chicago Bulls, Orlando Magic and Oklahoma City Thunder.

During his end-of-season availability earlier in the week, Ujiri acknowledged interest in Griffin from other teams.

"I think Adrian is right there on the cusp of becoming a head coach in this league," Ujiri said. "Nick has done a great job developing these guys and we encourage it as much as we can."

The Wichita, KS native spent 10 seasons in the NBA as a player from 1999 to 2008 with the Boston Celtics, Dallas Mavericks, Houston Rockets, Bulls and Seattle SuperSonics.

The Lakers are in need of a new head coach following the firing of Frank Vogel after three seasons.