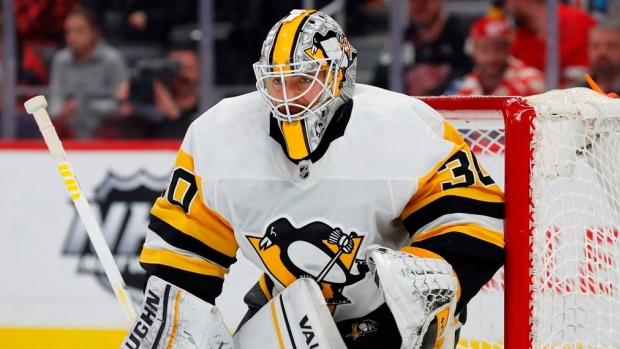 As the Ottawa Senators continue to plod through a multi-year rebuild, one of the key focus areas for the organization will be in net.

Only one team gave up more goals than Ottawa (243) last season, and that was with goaltenders Craig Anderson, Anders Nilsson, and Marcus Hogberg playing reasonably well.

Anderson, a veteran who spent 10-years in the nation’s capital, was not extended by the organization and remains an unsigned free agent. This part of the transition was expected – Anderson, now 39, was showing signs of performance decline and was blocking a couple of goaltending prospects from an increase in workload.

But interestingly, the team chose not to hand the reins over to a Nilsson and Hogberg tandem. Hogberg, still just 25-years old, showed he was capable during 24 starts last season. But when presented with the opportunity to keep Hogberg in the development queue by adding an established NHL goaltender, Ottawa jumped on the opportunity, acquiring Pittsburgh’s Matt Murray for a second-round pick and prospect Jonathan Gruden.

It’s an interesting gamble for Ottawa – it’s hard to think of another goaltender whose performance at the highest professional level has been more volatile than Murray.

From 2015 to 2017, Murray looked like the real deal behind a much more capable Pittsburgh team. But since then, his performance has been all over the place, highlighted by a disastrous 2019-20 campaign. Murray stopped just 89.9 per cent of shots and ultimately lost the starting job to Tristan Jarry.

In most cases, you would think this was a sensible “buy low” move from Ottawa. Acquiring otherwise quality players after down years is usually a good business to be in, with the laws of regression applying to netminders the same way they do anywhere else in life. But the Senators gave Murray a four-year, $25-million contract ($6.2-million AAV) after the trade, ensuring that he’s going to be a long-term piece for the team. That creates some degree of risk.

Quantifying that risk is important. It is true that Murray has struggled at times, but it is also true that he just turned 26. It’s rare for a goaltender to accumulate so much time before reaching that age – when they do, they generally come from the top of the NHL Draft. At any rate, let’s compare Murray’s career over this period against other goaltenders who accumulated time between their age 20 and 25 seasons, then see how they fared over the next four years (in line with Murray’s four-year extension): 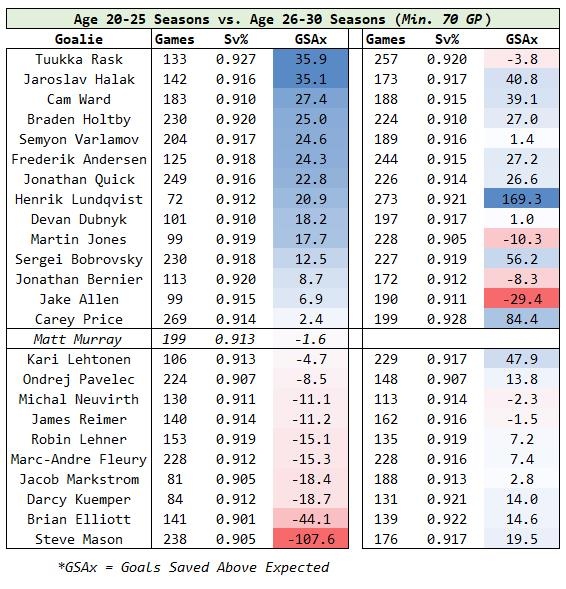 There are two ways to look at this. Let’s start with the good part (and perhaps the more obvious part) of the two: goaltenders who establish themselves at such an early age tend to be productive as the age through the league.

There are clearly varying degrees of success – goaltenders like Henrik Lundqvist and Carey Price, two future Hall of Famers, saw their production surge as they aged through their twenties.

To that end, I think it’s fair to say that the “floor” for the Matt Murray contract is pretty well insulated. Across all of these examples, there are only a couple of instances in a goaltender falling apart – Montreal’s Jake Allen and San Jose’s Martin Jones headlining that list.

Now for the bad news.

Great goaltenders - not surprisingly - tend to manifest themselves very early in their career. In Murray’s 199 games, he has stopped 91.3 per cent of shots (right around league average) and has given up one goal more than expected based on the shot profile faced (also right around league average). Then look at Murray’s cluster of peers: Jonathan Bernier, Allen, Price, Kari Lehtonen, Ondrej Pavelec, Michal Neuvirth and James Reimer. Outside of Price (and further down the list, Robin Lehner), that’s a relatively underwhelming list. A lot of accomplished goaltenders, but very few entrenched starters.

To that end, I expect Ottawa will go the way of other teams around the league and establish a platoon until they have a better feel for what Murray will bring to the table. It seems likely he will be productive. But there’s a wide gulf between productive and entrenched starter. And ultimately, Ottawa’s bet on the goalie from Thunder Bay, Ontario will be decided on how much more development opportunity there may be for Murray under a new coaching staff.