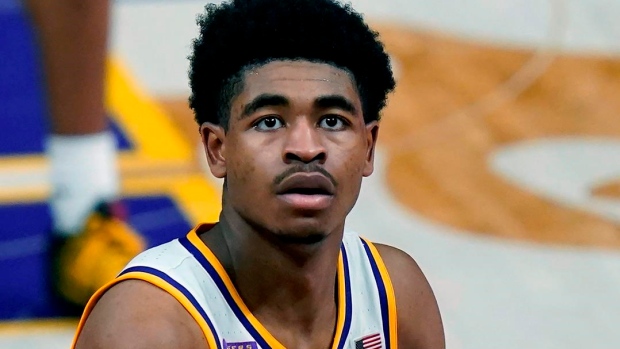 BATON ROUGE, La. — LSU freshman Cameron Thomas, whose 23 points per game led the Tigers in scoring, announced Thursday that he is declaring for the NBA draft and intends to sign with an agent.

The 6-foot-4 guard from Chesapeake, Virginia, led all Division 1 freshmen in scoring last season while helping LSU advance to the finals of the SEC Tournament and the second round of the NCAA Tournament.

Thomas scored 27 points in a victory over St. Bonaventure and 30 points in a loss to Michigan in his two NCAA Tournament games.

Thomas made his announcement in a social media post that also was disseminated by LSU.

He is the latest of several prominent LSU players to declare for the NBA draft. Junior guard Javonte Smart also has done so, along with junior forward Darius Days and sophomore forward Trendon Watford. Days is the only one among them who did not specify that he was hiring an agent.

Players who go undrafted and have college eligibility remaining may return to their college teams, but only if they terminate any relationships with agents, and if their prior dealings with agents did not violate NCAA restrictions regarding the limited financial benefits agents may provide clients who have yet to play professionally.

The exodus of players from LSU was expected. But it also comes as the NCAA continues to look into allegations of improper recruiting tactics by coach Will Wade.