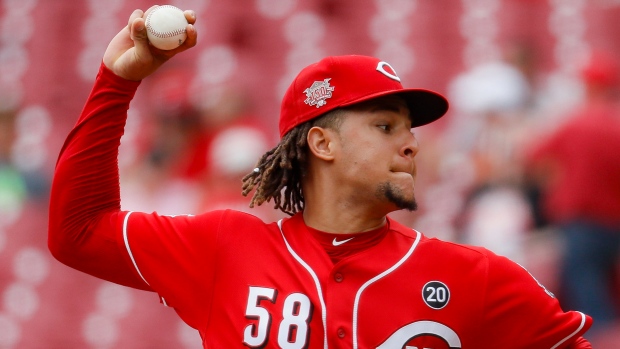 CINCINNATI — Luis Castillo didn't have his best stuff, but it wasn't nearly as bad as his last start.

"It wasn't Luis' best game, but even without his best game, he was good," manager David Bell said. "That's what it takes. Even when he's not at his best, he's really, really good."

Castillo (12-5), who allowed nine hits and eight runs on Friday against St. Louis, bounced back to limit San Diego to five hits and one run with four strikeouts.

"When your pitches aren't very good but you get a lot of soft contact, you know you're doing a good job," Castillo said. "I think the adjustments you make between starts helps. After the start against the Cardinals, I had to work hard."

The Reds sent nine batters to the plate while scoring three runs in a third inning started by Eric Yardley (0-1), who got the loss in his major league debut after being promoted from Triple-A El Paso before the game. Nick Senzel led off with a line drive on Yardley's first pitch that left fielder Josh Naylor misplayed for a two-base error. Senzel scored one out later on Eugenio Suárez's single.

"He got a bad break on his first pitch," San Diego manager Andy Green said. "It's tough when you get a fly ball on your first pitch and don't get an out. You've got to rise up."

After laying down a sacrifice bunt in the third, Iglesias lofted his ninth homer of the season into the seats down the left field line with one out in the fourth inning for a 4-1 lead.

"I just did my part," Iglesias said about his bunt. "It paid off. It set the table for the other guys, and it was a huge inning. When you play the game the right way, good things happen."

Francisco Mejía led off the seventh inning for the Padres with his eighth homer of the season, a solo shot off Lucas Sims. Greg Garcia drove in Ty France with a third-inning two-out double for San Diego's other run.

Matt Strahm made his 16th start of the season and first since July 2 as the first of five pitchers on a bullpen day for the Padres.

The Reds loaded the bases against Yardley before Trey Wingenter came in and issued two bases-loaded walks.

The Reds finished 5-2 against San Diego this season to win their first season against the Padres since 2012.

Reds C Tucker Barnhart picked up his sixth career stolen base in the second inning and first since Aug. 26, 2017, when Padres C Francisco Mejía dropped the ball between his feet and couldn't immediately locate it.

Iglesias and Barnhart are the only two Reds non-pitchers to have sacrifice bunts this season. Each has one.

Mejía's homer was the fourth of his career against the Reds, all at Great American Ball Park. He has hit seven against the rest of the major leagues, no more than one against any other team.

The Padres have hit 188 homers this season, one short of matching the club record set in 2017.

Padres: RHP Chris Paddack (7-6) has a 7.98 ERA in three August starts going into Friday's game against Boston in San Diego.

Reds: RHP Anthony DeSclafani (6-7) is 0-2 with an 8.10 ERA in two starts against the Pirates this season going into Friday's series opener in Pittsburgh.