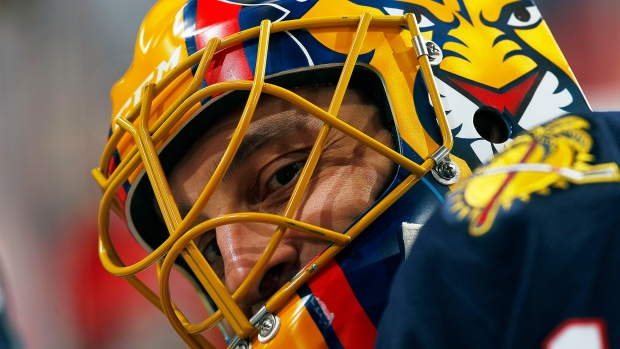 One of the more intriguing signings of the off-season was that of goaltender James Reimer by the Florida Panthers.

The move makes a lot of sense for both parties involved. For Reimer, he’s got a very real long-term opportunity at leading a team and seeing significant ice-time – something that has been hit-or-miss through the earlier parts of his career. For Florida, they have now an easy, smooth transition in the crease. Current starter Roberto Luongo is now 37-years of age, and at some point, the Panthers needed to start hedging against age and mileage degradation. To that end, Reimer is a fantastic bet.

The curious part of this goaltending dynamic is really in the short-term. The logical solution is to create a 1A/1B scenario in Florida, where Luongo and Reimer will shoulder an equitable share in net. This will alleviate some of the workload for the older Luongo and provide real shot-stopping competency in the 30-or-40 games that Reimer does work the crease.

There is an interesting wrinkle however; Luongo’s performance isn’t diminishing. In fact, he seems to be enjoying a late-career renaissance period that we have really only seen from a handful of players. Whereas most players at this stage of their careers are hanging on by a thread, Luongo’s trekking on the path blazed by Jaromir Jagr – excellence that’s superseded with each passing year despite every reason to be hesitant about his game heading south.

Below is a year-by-year look at Luongo’s 5-on-5 stop-rates. And, as you might have guessed, his numbers are consistently admirable: 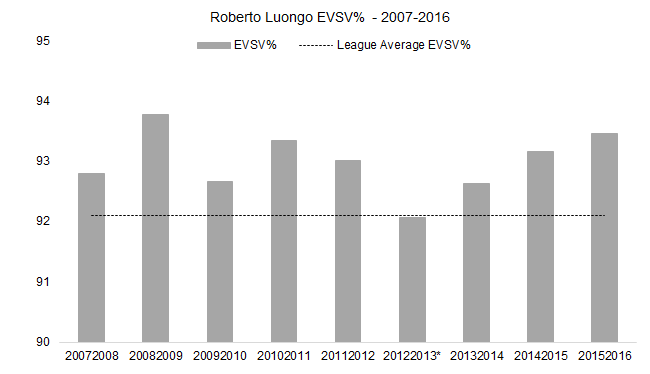 It’s hard to know which to be more impressed by here. On one hand, you have an aging goaltender who is consistently beating league averages. He’s done that in eight of the last nine seasons, and the only year he even approached break-even was (a) in a lockout year; in which (b) he played just 20-games. He has also improved his save percentage in every season since that 2012-2013 downtick, which should not go unnoticed.

On the other hand, you have the fact that his numbers are again trending upwards to what we would consider truly elite performance levels as he enters his late 30’s. Remember all of the (well deserved!) hype around Roberto Luongo for his performances in 2010 and 2011? Well, keep in mind that his performance in the last two years with Florida has actually been better.

That’s a point worth emphasizing. Last season, Luongo stopped 93.5% of shots for the Florida Panthers across 61-games – a level of games where you would assume that performance would start to degrade, especially when you consider the number of back-to-back situations that today’s NHL goaltenders are exposed to.

That performance – if you use 60-games as sort of a criteria or cut-line – is actually one of the best single-season runs we have seen since 2007. In fact, only four goaltenders have beaten that number:

All this to say: I think hedging against the aging curve is almost always the smart bet, and I still think it makes sense for Florida to have an insurance policy with Reimer as they transition to the post-Luongo era.

The only point worth emphasizing here is that the Luongo era may go much longer than any of us anticipate. There is really no evidence that his game is deteriorating in any way. By his purest performance metric or measurement, Luongo consistently grades out as a goaltender ranging somewhere between great and elite – his last two seasons in Florida certainly fitting into the latter category.

Having too much talent in any one area is a problem that any executive or coach would kill for, but it’s going to make the weekly shuffle something worth watching down in Sunrise. And to be clear, Luongo is not going to go down without a fight.