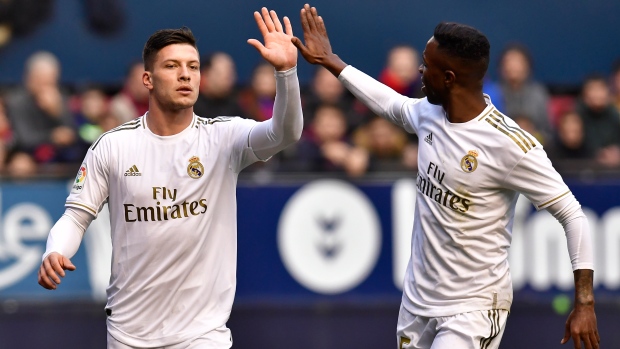 PAMPLONA, Spain — Real Madrid rallied to a 4-1 win at Osasuna on Sunday to stay ahead of Barcelona in the Spanish league.

Osasuna took an early lead but Francisco “Isco” Alarcón and Sergio Ramos scored goals five minutes apart late in the first half to lead Madrid to what turned out to be an easy victory after a disappointing home elimination against Real Sociedad in the Copa del Rey on Thursday. That defeat ended Madrid's 21-game unbeaten streak in all competitions.

Substitutes Lucas Vázquez and Luka Jovic added second-half goals for Madrid, which had won eight straight before the loss to Sociedad.

“We were coming off a difficult elimination in the Copa, this was a difficult match for us mentally,” said Madrid midfielder Casemiro, who set up Ramos' goal. “We showed that we remain a title contender. These three points were very important.”

Madrid hasn't lost in the league since playing at Mallorca in October.

Osasuna opened the scoring with a diving header by Unai García off a corner kick in the 14th minute, but Isco equalized with a volley in the 33rd and Ramos scored the go-ahead goal with a header in the 38th. Vázquez got on the board in the 84th and Jovic in stoppage time.

It was only the second goal of the season for Isco, and his first in the Spanish league since March 2019.

It was the eighth consecutive league match without a win for Osasuna, which dropped to 12th in the standings.

The match marked the return of Gareth Bale to the Madrid lineup. He hadn't been called up by coach Zinedine Zidane in the last four games.