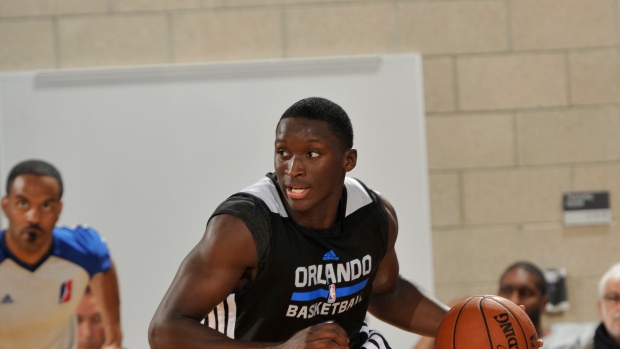 ORLANDO, Fla. - The Orlando Magic will be missing a pair of projected regular-season starters for their preseason opener.

The injury occurred when Oladipo landed awkwardly during a scrimmage Friday. It came a day after free agent pickup Channing Frye sustained the same injury in his left knee following a collision during a scrimmage.

Oladipo was able to finish Friday's scrimmage, but was sent for an MRI on Saturday after reporting soreness.

"This could have been way worse, so I'm lucky," Oladipo said Monday. "I'm just going to heal up and prepare mentally so that when I come back I won't be a step behind. Hopefully, it will be a step forward. . I just think if (the knee injury) was really serious that I wouldn't have been able to finish (Friday's scrimmage). But it is what it is, I'm taking it one day at a time and based on the treatment we'll see when I'll be able to come back."

There is no timetable for either player's return, which will depend on how each responds to treatment.

Orlando also will be without guard Willie Green, who is listed as day-to-day with a hyperextended left knee. Green was acquired off waivers in June.

The Magic have only six players on their preseason roster that were on the roster to begin the regular season a year ago.

The injuries will obviously be to blow to building early chemistry, but coach Jacque Vaughn said it will allow other players to get playing time in the meantime. That list includes rookie Elfrid Payton, and Evan Fournier, who the Magic acquired in the draft night trade that sent Arron Afflalo to Denver.

"It gives an opportunity for other guys to understand how we want to play," Vaughn said. "It's not ideal and we'd love to have all 15 guys ready to rock and roll, participating and learning each other, but that's not where we are. But you know we won't complain and we'll keep this thing rolling."

Oladipo said he plans to stay busy while he's away from game action.

"At the end of the end of the day I've just got to figure out how to stay close to my team and get better away from the court, whether that's watching film, watching games or improving myself mentally," he said.