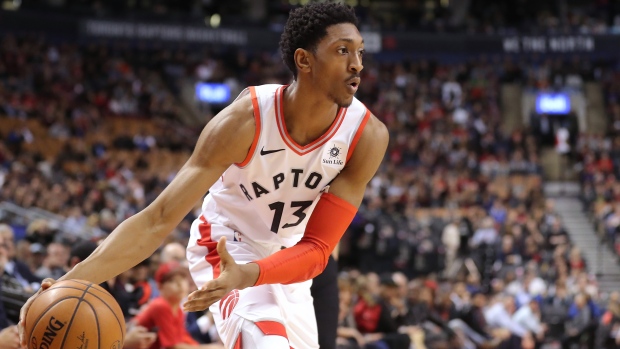 Bench player Malcolm Miller and assistant coach Brittni Donaldson were the first duo to train at the Toronto Raptors' practice facility earlier this week as the organization cautiously begins preparing for a possible season resumption, according to TSN's Josh Lewenberg.

Miller, 27, requested to be the first player to workout at the OVO Centre on Monday as he was itching to get back onto the basketball court.

Miller said he requested to be the first Raptors player to workout at OVO Centre on Monday. He's been keeping busy playing video games and the piano at home but was itching to get back on the court.

Workouts are voluntary & Raps aren't pressuring guys to come in. Not every player in Toronto has been at the facility yet. They're making a schedule each day based on who wants to workout. Each coach is assigned to 1 player (Donaldson will only workout with Miller, for instance)

"It definitely felt strange but it was great to get back to the game I love, even in a different format," Miller told Lewenberg.

Miller and Donaldson were both screened before entering the building and trained for about an hour. For the time being, the Raptors are allowing only one player and one coach train at a time. Miller says he plans on working out at OVO Centre four to five times a week.

Lewenberg notes the workouts are voluntary and not every player currently in Toronto has attended a session at the practice facility yet.

NBA Commissioner Adam Silver spoke to the Board of Governors on Tuesday and indicated that he would like to make a decision in the next 2-4 weeks on whether or not to resume the 2019-20 season, according to a report by Shams Charania of the Athletic.

Silver said he is "feeling increasingly positive about the league's momentum toward a resumption of play this season."