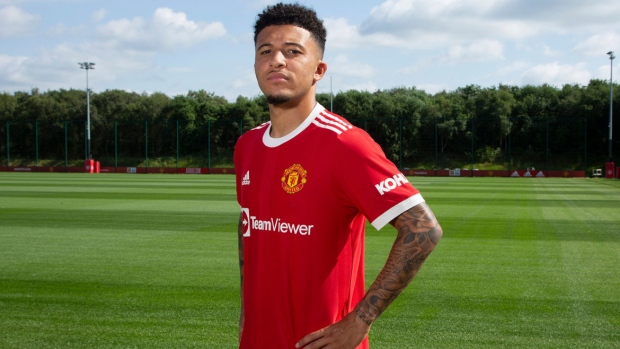 Manchester United officially unveiled Jadon Sancho on Friday, completing a protracted £73 million transfer from Borussia Dortmund over a year in the making.

The 21-year-old England winger has signed a five-year deal with the club and will wear the No. 25.

"Growing up, Manchester United was one of the biggest clubs that everyone knows, and of course there is also all the trophies they’ve won and there have been many iconic players that have come before me," Sancho said in a statement. "So I’m very happy to be wearing this jersey now."

A native of London, it's a return to Manchester for Sancho, who spent three years at the Manchester City academy before joining BVB in 2017.

"Jadon epitomizes the type of player I want to bring to the club - he is a forward player in the best traditions of Manchester United," Solskjaer said. "He will form an integral part of my squad for years to come and we look forward to seeing him blossom. His goals and assists records speak for themselves and he will also bring tremendous pace, flair and creativity to the team."

Internationally, Sancho has been capped 22 times by England and was a member of the Three Lions squad that reached the final of Euro 2020. Sancho, along with United teammate Marcus Rashford and Arsenal's Bukayo Saka, was subjected to racial abuse online when he missed a penalty in England's loss to Italy in the final.

United, runners-up to City last season, open their 2021-2022 campaign on August 15 at home to Leeds United.