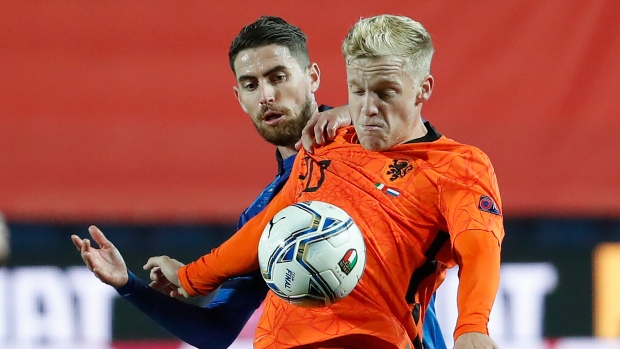 If the Netherlands are going to win Euro 2020, it will be without Donny van de Beek.

The Royal Dutch Football Association (KNVB) announced on Tuesday that the Manchester United midfielder had been withdrawn from the 26-man squad due to a groin injury.

"Donny van de Beek has to let the European Championship pass by," the KNVB said in a statement. "The Manchester United midfielder is struggling with an injury."

Because the injury designation was made prior to the tournament proper, Frank de Boer's team is entitled to make a replacement, but has not announced one as of yet.

The 24-year-old van de Beek just completed what was a largely disappointing first season at Old Trafford following a £35 million move from Ajax. Sparsely used by manager Ole Gunnar Solskjaer, van de Beek made only 19 league appearances this past season with only four coming as starts.

Internationally, van de Beek has been capped 19 times by the Oranje with his last appearance coming in a Mar. 30 thrashing of Gibraltar.

The Netherlands kick off their Euro campaign on Sunday in Group C action against Ukraine in Amsterdam.