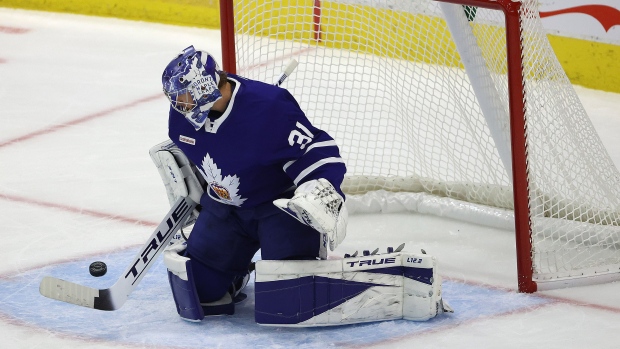 Andresen, playing his first full game with the Marlies as he works his way back into game shape following a long layoff due to a lower-body injury, struggled early in the game, giving up a goal to Trent Bourque on Manitoba's first shot of the game.

He ended up with 34 saves on 38 shots, and stopped two of Manitoba's four shooters in the shootout.

Haralds Egle, Cole Perfetti and C.J. Suess also scored in regulation for the surging Moose (17-11-3), who have won three straight games and eight of their last 10. Perfetti also scored in the second round of the shootout.

Tyler Gaudet, Nick Robertson, Mac Hollowell and Teemu Kivihalme scored for the Marlies (11-14-2). Kalle Kossila scored in the third round of the shootout.

Moose goaltender Mikhail Berdin made 33 saves and stopped three of four Marlies in the shootout.

Andersen played half of Toronto's 5-3 loss to Manitoba on Thursday. It was his first game since March 19.

Andersen was 13-8-2 with a 2.91 goals-against average and career-worst .897 save percentage in 23 games before going down with the lower-body injury.

This report by The Canadian Press was first published May 8, 2021.