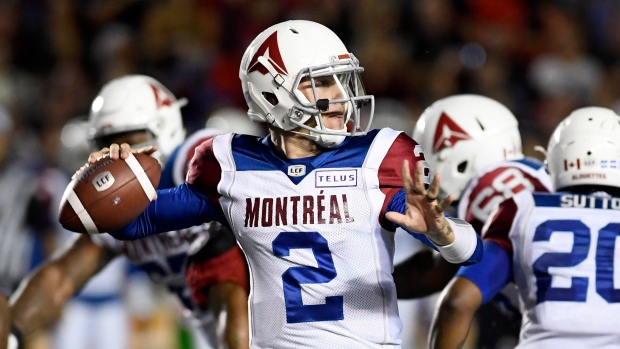 MONTREAL — It appears Johnny Manziel may have suffered a concussion after all.

The gifted quarterback the Montreal Alouettes acquired in a blockbuster trade with Hamilton on July 22 missed practice for a second day in a row on Wednesday, and the team announced he has been placed under the CFL concussion protocol.

It's unclear how long the 2012 Heisman Trophy winner will be out of action, but he's highly unlikely to play when the Alouettes (1-7) visit the Eskimos (5-3) in Edmonton on Saturday night.

Manziel was rocked by a hit while trying to run the ball over the goal-line in a 24-17 loss in Ottawa last weekend in his second career CFL start. He completed the game, but did not look as sharp as before the hit.

"On Tuesday morning, Johnny Manziel mentioned to our medical staff that he felt symptoms that could be associated with the prescribed medication he uses for a previously diagnosed medical condition," the Alouettes said in a statement. "He then missed practice in order to have some blood work done.

"In view of the hit he received on Saturday and the potential mitigating side effects of his prescribed medication, the Alouettes medical staff has placed Manziel under the CFL concussion protocol for further observation and precautionary reasons. Manziel will be closely observed and assessed in the next few days."

Manziel has said he suffers from bipolar disorder. The former Cleveland Brown sought treatment for anger management and alcohol abuse as part of his acquittal on a 2016 charge of domestic violence and has vowed to stay clean to help get his football career back on track. He was cleared to play in the CFL after agreeing to meet some undisclosed conditions.

The possible concussion is the latest in a bewildering string of injuries to Montreal quarterbacks this season that has already claimed Drew Willy, Jeff Mathews and Vernon Adams. Another pivot, Matt Shiltz, recently returned from an injury but is not yet fit to start.

There was concern that Manziel had suffered a concussion during the game and should have been taken out, but coach Mike Sherman said he was looked at by experts and cleared to continue playing.

"I was right there when it happened," said Sherman. "He came off the field, sat down.

"We were going to go for two (on the convert) and then the doctor said he's out. Then we decided to go for one. I went over to the bench. He was talking coherently. It didn't look like there were any problems. The official came in right beside me. He said 'this is what I have to see.' So he came over and looked at Johnny and he said 'oh, he looks OK.' So that was that.

"There was a spotter and our doctors were there, so I left."

Sherman said he drove back from Ottawa with Manziel and all seemed fine. But he missed practice while going for blood tests Tuesday and wasn't on the field again on Wednesday, although he attended quarterbacks meetings both days.

"If I knew there was anything wrong with Johnny. . . I would never put a player in harm's way and neither would this organization," said Sherman. "The doctors looked at him. The spotter looked at him. He recited the playbook to us, which is not an easy thing to do. So at the point, he was ready to go in."

The Alouettes have banked heavily on Manziel to help save their season. The former Texas A&M star had a disastrous CFL debut two weeks ago against Hamilton, throwing four interceptions in the first half, but looked much better against Ottawa.

Sherman said that if Manziel is able to practice on Thursday there's a chance he could play, but that appears unlikely.

Instead, the Alouettes go into one of the league's toughest places to win with an untested quarterback.

"We've got to come out and play detail, no matter who is out there," said running back Tyrell Sutton, who also took a nasty head hit but suffered no apparent ill effects. "We've got to protect the quarterback first."

Antonio Pipkin, who was released in June and called back to join the practice roster on Aug. 6, has taken first-team reps in practice this week and is expected to make his first CFL start in Edmonton, with Austin Apodaca as the back-up. Pipkin would be Montreal's fifth starter, and sixth quarterback used overall, in nine games.

"I knew the offence and, the few new wrinkles we had, we kind of worked them out right away," said Pipkin, who appeared in one game last season, going 2-for-9 for 14 yards.