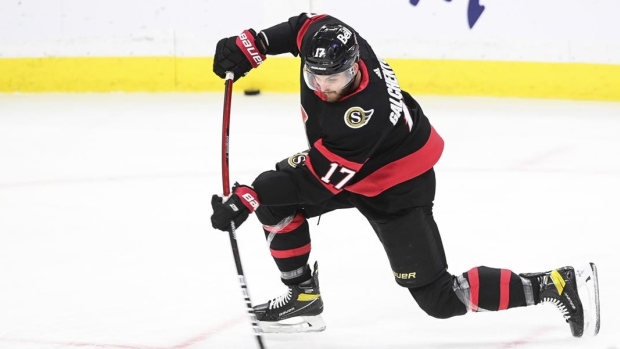 TORONTO — Alex Galchenyuk might never have predicted a career trajectory that went from high first-round draft choice to landing with six different teams in the last three years. But following his trade from Carolina to the Maple Leafs last weekend, Galchenyuk is decidedly uninterested in focusing on his rocky past, when there is still a potentially hopeful future ahead.

“We can sit here and talk about what went right, what went wrong,” Galchenyuk told reporters on a Zoom call Sunday following some on-ice sessions at Ford Performance Centre. “But I think that's part of playing hockey, playing the sport. There was a lot of great times. We can sit here and talk all day about my career and the turns, but that's not where my head is. My head is here, and I'm really excited to be here.”

How he arrived in Toronto has been a winding road, punctuated by the events set in motion eight days ago. That's when, on Feb. 13, Galchenyuk was traded by Ottawa to Carolina for Ryan Dzingel and then subsequently placed on waivers. When he cleared, Galchenyuk was traded again, this time to the Leafs for Egor Korshkov and David Warsofsky. All that went down over the span of an eventful 48 hours – both personally and professionally.

“It was a pretty wild couple days,” Galchenyuk admitted. “Definitely a big weekend, and I turned 27 too [on Feb. 12] at that time, so a big couple days. [Carolina] had just told me to sit tight [after the trade] and they'd let me know what the plan was the next [morning], and then the next morning I was on waivers.”

That wouldn’t be the first time in recent years that Galchenyuk has been staring down the barrel of imminent change.

The third overall pick by Montreal in the 2012 NHL Entry Draft, Galchenyuk faced the weight of expectations that come with being such a selection. He tried living up to them with the Canadiens, appearing in 418 games and amassing 108 goals and 255 points. His best season to date unfurled with a 56-point campaign in 2015-16, the only time Galchenyuk has ever hit the 30-goal mark.

In June 2018, Galchenyuk’s time in Montreal came to abrupt end, when he was shipped to Arizona in exchange for Max Domi. He’d spend one season there, appearing in 72 games with 19 goals and 41 points.

Then it was off to the next stop, this time via trade to Pittsburgh, where Galchenyuk almost immediately suffered a lower-body injury that would hold him to just 45 games and 17 points for the Penguins before he was traded to Minnesota. Galchenyuk appeared in 14 regular season games for the Wild and notched seven points, and went on to skate in four postseason contests as well.

By late October, Galchenyuk had signed a one-year, $1.05 million free agent contract with Ottawa, but started out the season for them as a healthy scratch. When he did get in, Galchenyuk failed to record a point in his first seven games, and ended up with one goal in eight total appearances before the trade to Carolina.

While he never actually reported to the Hurricanes, the whole experience has been a whirlwind for Galchenyuk, and he’s happy now just to be focused on hockey.

“[The hardest part] is the move itself from one place to another,” he said.” “It’s not really hockey things, but trying to find a home and this and that. But obviously over the years you meet a lot of guys, a lot of teammates and then you bring some friendships along the way, and then there's a new system now, everything is new. But it's part of life and it's exciting [to get going].”

One teammate who was especially glad to see Galchenyuk in the fold is goaltender Jack Campbell. After Galchenyuk did a 30-minute practice session with Leafs’ assistant skating consultant Randi Milani, he joined Campbell, who’s rehabbing from a leg injury suffered on Jan. 24, to do some on-ice work together.

Campbell goes back a long way with the winger, to when they both played in the Ontario Hockey League from 2010-12. Moving up through hockey’s ranks, Campbell also faced Galchenyuk when he was netminder for the Los Angeles Kings, and couldn’t resist resurrecting a memorable encounter when the two shared a dressing room for the first time.

“He actually ripped a one-timer by me in preseason like three years ago in Arizona,” Campbell laughed. “And when I saw him the first time, I said, 'Remember the shot?' and he was like, 'Oh yeah!' It was cool; I'm glad he's on this side now. I like his demeanour out there, he has fun but he works really hard and I think everybody will see how skilled he is too so I'm really excited to have him.”

The goaltender isn’t the only familiar face for Galchenyuk in Toronto. He was taken in that 2012 draft just two spots ahead of where the Leafs took Morgan Rielly, and Galchenyuk said they’ve stayed in touch over the years after getting to know one another during pre-draft events.

More than anything though, Galchenyuk is anxious to actually bring his skill set into the Leafs’ lineup, although he admits head coach Sheldon Keefe hasn’t told him much about when or where that might happen.

“I haven't spoken a lot about a plan or where [I'll play] and all that stuff,” he said. “[Keefe told me to] just keep getting better, stay prepared, stay ready and I'll get my opportunity.”

Until that time comes, Galchenyuk intends to continuing tapping into the Leafs’ skill and development team to ensure he’s ready to make good on his chance.

“Skill is a big part of my game,” he said. “I'll keep working on it and be dialled and then keep focusing on making a few adjustments and then keep working on the traits of the game. Today was the first time I had to pretty much touch base on some things [with the skills' staff] and I'm looking forward to that and keep working. Keep working, keep attacking, keep going out there and making plays. That's my game and you've just got to compete basically.”