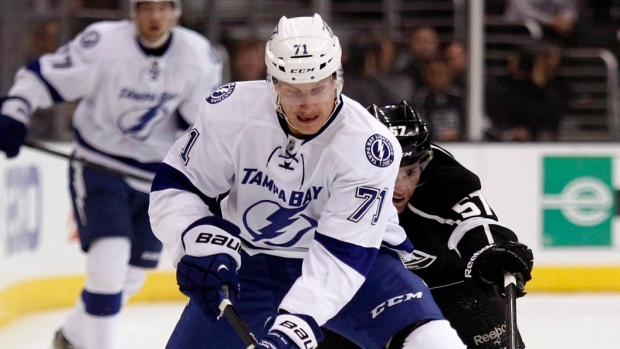 TORONTO - Richard Panik hopes to develop some more consistency with the Toronto Maple Leafs, who improved their forward depth by claiming the winger off waivers from the Tampa Bay Lightning.

"It's going to be a great motivation for me to play in front of those fans and just bring my A-game every night," Panik said Thursday on a conference call with Tampa Bay media. "There's a lot more pressure going there because it's Canada and especially Toronto. I'm just going to focus on my game and my next step is getting into the lineup and go from there."

After making his NHL debut during the lockout-shortened 2013 season, the 23-year-old developed into a full-time NHL player last year with the Lightning and had three goals and 10 assists in 50 games.

Panik became the odd man out in Tampa Bay after a less-than-inspired training camp and pre-season when Brett Connolly and rookies Vladislav Namestnikov and Nikita Kucherov emerged to make the team.

Panik wondered in the final days of camp if this might be coming, especially when he wasn't in the lineup for the final exhibition game. Still, he was disappointed his tenure with the Lightning ended like this.

"I tried my best," Panik said. "Even at the camp I tried to make the team, and it didn't work out."

Claiming the 2009 second-round pick could be a smart gamble for the Leafs, who boasted they'd be better because of competition for roster spots not only in camp but during the season.

Panik could fit on Toronto's second or fourth line, possibly displacing Matt Frattin. With Brandon Kozun's speed game making him an interchangeable part up and down the lineup, the six-foot-one, 201-pound Panik brings a different dimension.

"It's going to be a new start for me and I'm going to do my best to make the lineup in Toronto," Panik said. "I'm very excited about it."

To make room for Panik, the Leafs sent wingers Josh Leivo and Troy Bodie to the AHL's Toronto Marlies.

Those players will be available to the Marlies when they open their season Saturday against the Utica Comets, the AHL affiliate of the Vancouver Canucks.