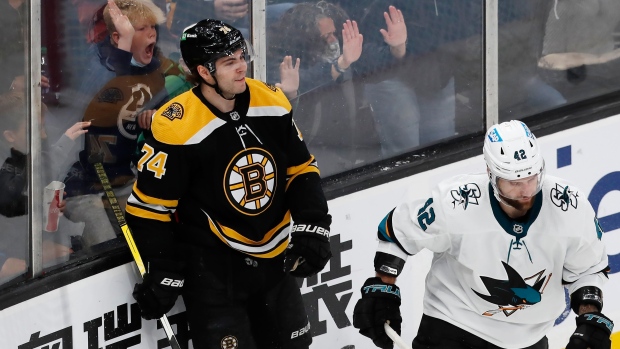 BOSTON (AP) — Brad Marchand scored 28 seconds into the game and added an assist as the Boston Bruins ended San Jose’s unbeaten start with a 4-3 victory over the Sharks on Sunday.

David Pastrnak and Derek Forbort each had a goal and an assist, and Jake DeBrusk also scored for Boston. Patrice Bergeron had two assists and Linus Ullmark finished with 23 saves for the Bruins, who held on after the Sharks scored back-to-back goals late in the third period.

The Sharks pulled their goalie for the final 1:37, but Forbort and his fellow defensemen helped Ullmark weather the late push and hang on.

“That’s to be expected when you’ve got a one-goal lead and they’re pushing hard to score,” said Forbort, who signed with Boston as a free agent in July and got his first goal as a Bruin on Sunday. “I love it. Being out there with a one-goal lead, goalie pulled, it’s kind of my favorite time to play hockey."

Jasper Weatherby, Tomas Hertl and Timo Meier scored for the Sharks, who were trying to start 5-0 for the first time since 2013. Adin Hill was pulled after allowing four goals on 14 shots in the first 21:28. James Reimer replaced Hill and stopped all 20 shots he faced, keeping the Sharks close before goals 1:49 apart in the third made it a tight finish.

“There were some tips in front that made the game a little bit more interesting than it had to be, so that’s on me,” said Ullmark, who won back-to-back starts. “But overall, it was a step in the right direction.”

Hertl pulled the Sharks to within 4-2 when he tipped in a goal with 6:41 left in the third. Meier made it a one-goal game on a tip with 4:52 remaining. The Bruins challenged whether Meier’s stick was too high when it made contact with a shot by Logan Couture, but the call stood after a video review.

Marchand needed just 28 seconds to put Boston up 1-0 on a wrist shot from the slot after taking a setup pass from Bergeron from behind the net. Pastrnak also had an assist as Boston’s top line got the Bruins rolling early and kept it up throughout the first period.

Marchand picked up an assist on a crossing pass to Forbort, whose wrist shot from just inside the blue line put Boston up 2-0 with 16:42 left in the period. Bergeron set up Pastrnak’s power-play goal with 3:48 left in the first, and DeBrusk added his second goal of the season early in the second period, forcing a turnover and skating the puck up the left side before firing a wrist shot that Hill couldn't get with his glove.

“I thought Jake played well. He seems to have that extra step in his game this year, which is great to see. He’s such a dangerous player when he’s moving his feet and attacking the way he is,” Marchand said. “He can kind of make something out of nothing like he did on that goal there.”

Weatherby's goal 32 seconds after Pastrnak put Boston up 3-0 was San Jose's only goal until Hertl tipped in a shot with 6:41 left in the third.

“We only played maybe 10 minutes to our identity tonight and we almost got a point,” Hill said. “Think we just weren’t playing our game. There’s no particular reason. We didn’t do anything different. We all prepared the same way. It just wasn’t our night to start. We got it turned on at the end and hopefully we can carry that into Nashville.”

NOTES: It was the second home game for the Bruins, who play their next two on the road before returning to Boston on Saturday to host the Florida Panthers. … The Bruins placed F Nick Foligno (upper body) on injured reserve and assigned D John Moore to Providence of the AHL. … Boston recalled forwards Oskar Steen and Jack Studnicka from Providence. Steen assisted on DeBrusk's goal for his first NHL point. … The Sharks scratched centers Lane Pederson and William Eklund and added Alexander Barabanov and Jonah Gadjovich to the lineup. Gadjovich assisted on Weatherby’s goal for his first NHL point. … Boston’s Connor Clifton and Nick Bonino of San Jose had a brief fight late in the second period after Clifton leveled Andrew Cogliano with a hard hit between the benches. … Bruins outshot Sharks 11-5 in second period.

Sharks: At Nashville on Tuesday, wrapping up a five-game road trip.