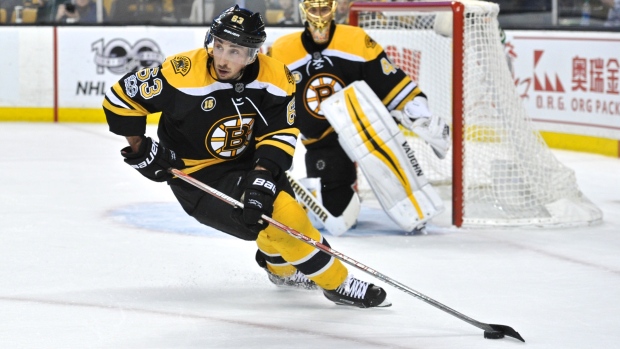 Boston Bruins forward Brad Marchand will have a phone hearing with the NHL’s Department of Player Safety on Thursday regarding a dangerous trip on Detroit Red Wings defenceman Niklas Kronwall.

Boston's Brad Marchand will have a hearing tomorrow for a dangerous trip on Detroit's Niklas Kronwall.

The incident took place during the first period of Tuesday’s game between the teams when Marchand appeared to kick out Kronwall skates as the play entered the Bruins zone.

Marchand, who scored twice in the Bruins OT victory, was not penalized on the play.

The 28-year-old served a two-game suspension in 2015 for slew-footing forward Derick Brassard when he was with the Rangers and was fined for the same infraction in 2011. However, Tuesday night's incident does not qualify as a slew-foot since he did not place his arm on Kronwall as he took out his leg.

A phone hearing means that any suspension to Marchand will be less than five games.

Marchand leads the Bruins with 49 points this season and sits second on the team in goals, with 19. He is the only player to record two five-point games this season.

A suspension could impact his participation in the NHL All-Star game this weekend.

If Marchand is suspended, don't believe there's an automatic carry over to all-star but it's not clear. League may need to rule on that.

Worth noting that in January 2012, Alex Ovechkin opted out of all-star weekend citing that he was in the middle of a three-game suspension