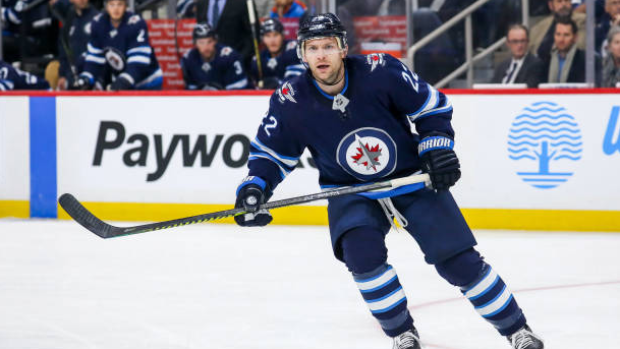 Veteran forward Mark Letestu is hoping to contribute to the Winnipeg Jets during the NHL's Return to Play after missing the majority of the regular season due to a heart condition.

Letestu, who signed a two-way contract with the Jets last July, made the team out of training camp but was sidelined after seven games upon being diagnosed with myocarditis. He was cleared to return and late February and assigned to the AHL in March but did not appear in a game before the season was stopped.

Speaking Tuesday after being named the Jets' Masterton Trophy nominee, the 35-year-old said he believes the extended break could give him a chance to once again crack the Jets lineup.

"At the time in March, the likelihood of me playing was pretty small," Letestu told NHL.com. "And that's not based on anything other than the guys in that room playing at the time had earned the right to get to play those games, and I fully respect that. As a teammate, I was just trying to prepare and it's shown that injuries happen and you want to be ready if there's an opportunity.

"But as this quarantine has gone on and everybody's been put on the shelf, my disadvantage for playing was not being active and trying to ramp back up quickly. Now everybody's going to have to deal with that similarly. The internal competition at training camp, there might be a little bit there and my focus is to go into whatever camp they give us and be an option, and hopefully more of an option than I would have been in March."

Letestu added that he is currently in Ohio and has been working out for three weeks and returned to the ice earlier this week.

The Jets are set to face the Calgary Flames in a best-of-five play-in series to determine who advances to the 16-team playoff field when the NHL returns.

Undrafted to begin his NHL career, Letestu scored a career-high 16 goals and 35 points with the Edmonton Oilers in 2016-17. He added five goals and 11 points in 13 games during the team's playoff run that season.

A veteran of 567 games, Letestu has scored 93 goals and 210 points over his NHL career.