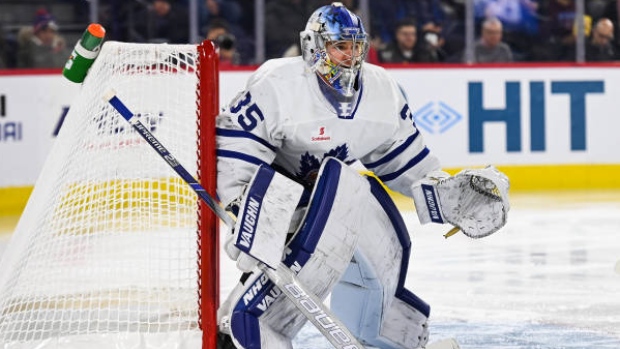 The Maple Leafs held a media availability at KeyBank Center on Saturday afternoon.

"The big thing is that as an organization, we really believe in him," coach Sheldon Keefe explained. "We believe in his talent. In an ideal world, you want him to really get rolling with the Marlies and really work to develop himself over the course of the season. As it turns out, there is an opportunity now."

An injury to Petr Mrazek and inconsistent play from third-string goalie Michael Hutchinson has opened the door for Woll, who will make his National Hockey League debut on Saturday.

"He has played well through camp," Keefe said. "He has worked extremely hard. It has been a while now, but he is coming off of an outstanding last start for the Marlies in his last game action [on Oct. 30]. He has had more than enough time to practice with us."

Woll has been with the Leafs since Mrazek was placed on injured reserve last Saturday.

"He's a smart kid," said defenceman Morgan Rielly. "He's worked hard and is great to have around the room. So, we're cheering for those guys who come in with good attitudes and work hard. You want those guys to get a shot."

A few days ago, Keefe gave Woll the heads up that he would start in Buffalo as the Leafs play the second game of a back-to-back set. The KeyBank Center is a fitting stage for Woll's debut. In 2016, the Leafs made him the first pick of the third round of the draft in this building. A couple years later he represented Team USA at the World Juniors in Buffalo.

The potential has always been there for the St. Louis native.

"I can remember his first start that he made with the Marlies," said Keefe. "I came away really impressed with his athleticism, his size, the way he competed in the net. In that game, he made some unbelievable saves. Those type of athletes, you know, you don't get them often in the American League. Throughout that [first AHL] season some of his stats weren't showing up the way you'd expect them to or hope they would, but you're just impressed with him every day."

Beyond excited to watch client Joe Woll make his first NHL start for the @MapleLeafs tonight!
It will be a special night for Joe, Shelley, Emma, Michael, and Bob. Great family that will have the entire STL hockey community behind them. #welldeserved #dreamscometrue @brick_WOLL29 pic.twitter.com/RyIAycnlmG

"Tremendous talent," observed Jack Campbell, who was mentored by Jonathan Quick during his time in Los Angeles. "I have a lot of fun watching him. I call him Quickie 2.0, because – not to give him too much pressure or anything – just, like, he's really flexible, makes some big-time saves and battles in practice. I just love a lot of the characteristics of his game."

It was a rocky transition from the NCAA ranks to the professional ranks for Woll. The Boston College product stumbled badly in his first year with the Marlies, posting an .880 save percentage in 32 games before the pandemic halted the 2019-20 season.

"The past couple years have been a little weird with how COVID's been, but it's afforded me a lot of opportunity to work on some stuff that I don't think I would've paid a lot of attention to," Woll said on Sunday in his only media availability since being called up.

Specifically, Woll has focused on the mental side of the game.

"The ups and the downs, I think especially the downs, have really given me an opportunity to look at areas of my game and my life that are really important," he said. "It's been a long road and I feel ready."

Woll spent time with the Leafs last season when Campbell was sidelined due to injury. He also accompanied the team into the bubble when the 2019-20 season resumed.

"Over the years, I've been fortunate to have some experiences up here and be able to learn some stuff from the goalies ahead of me and the coaches and players so it doesn't feel too uncomfortable right now," Woll said. "I feel like I belong. It's a little shift of not being too starstruck when you're out here and feeling like you really do belong and you can make a difference."

With Woll in net, Campbell finally gets a well-deserved rest. Entering Saturday's play, Campbell is tied with Montreal's Jake Allen for the NHL lead among goalies with 13 games played.

"It's fun," the 29-year-old said. "I feel like the more I play the better I can hopefully keep getting. Everybody around the league has the same schedule so it's good."

A first-round pick in 2010, Campbell seems eager to make up for lost time. He's a late bloomer in the NHL and this is the first time he's opened a season as a team's incumbent starter. He's never played more than 31 games in any NHL season.

"It's the fun part, playing games, and I don't think any goalie would complain about playing in this league," Campbell said. "I just absolutely love it and any time coach throws me in there, I try and give it my best and get the two points. So, it's great."

Campbell has posted an impressive 8-3-1 record this season with a .939 save percentage. He leads the NHL in saves entering Saturday's games.

"He's been on fire every game," said Timothy Liljegren. "I think he showed in pre-season as well that he's ready to take that next step."

But Keefe doesn't see it the same way and is doing his best to pump the brakes a bit when it comes to the Nylander hype train.

"Will has been playing really well," the coach acknowledged. "He has been producing for us a lot. I think Will has another level to get to. His production is great — really good, right where we want it to be, and he is producing a lot of chances — but there are still other areas of his game we would like to see him be better in. Will has produced at a really great clip and that is ultimately what we really need from him, but there are other areas of his game he can be better at. Is this the best I have seen him? No, it is not."

Where can Nylander still grow?

"Being more consistent," Keefe said. "He can control the game when he gets the puck and is moving his feet. When he is in control, he is as good as anybody in the league. He is capable of doing that all of the time, is what I believe. The production has been great. The way he is generating offence and chances has been really good. I think he can get even better. I am not satisfied. I hope and I know Will is not. I know he has great expectations of himself. As long as I have been here as the coach, whenever I talk to Will, he has regarded himself as one of the top players in the league. I am going to continue to push him to get there."

Before this current six-game surge, Nylander was coming off a six-game stretch, which saw him register just two points.

John Tavares logged 20 minutes and 57 seconds of ice time on Friday as he returned to the lineup after missing one game with a lower-body injury.

"Physically, I felt really good," the Leafs captain said. "If I'm going to be out there it's going to be because I believe I can play my normal game so no excuses there."

Tavares had picked up a point in his six previous games, but failed to find the scoresheet against the Calgary Flames.

"No practice or a game [since Monday] so just getting back into that physical element and just getting your feel and your rhythm again," Tavares said of the challenge. "Some good things, but some things I'd like to get better at."

There was one scary moment when Tavares blocked a shot and was in obvious pain.

"Not much padding where I got that one," he said with a smile, "so, it stung there for a little bit."

Tavares stung by the shot block here. Looks like he is OK at the end, but that must have been painful. pic.twitter.com/9fPt1dB6nz

The Leafs are making two lineup changes tonight. Kirill Semyonov draws in up front. Wayne Simmonds will sit as a healthy scratch for the first time in his Leafs career. On defence, Travis Dermott draws back in after sitting the last two. Rasmus Sandin will be the odd man out.

"I want to use our depth," Keefe said. "In both cases, just a chance to manage their season and manage their minutes and things like that. In Rasmus' case, he's played a lot here as a young guy for us and has had some bumps and bruises along the way and has played through it. Today, he'd be fine to play, but we just thought that, given we want to get Dermott in, it made sense to give Rasmus the day."

Keefe pointed out that the Leafs are 0-2 on the second half of back-to-back sets so far this season.