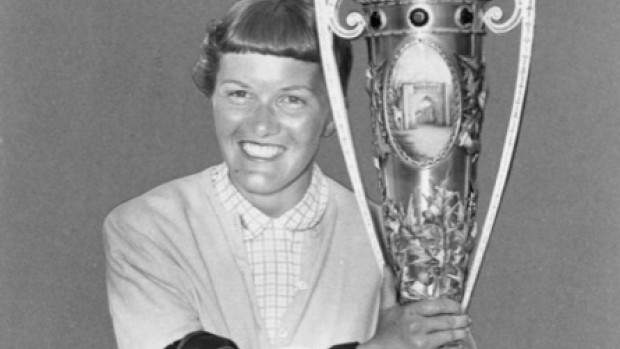 As this year’s championship plays on at Woodmont Country Club in Rockville, Md., Streit reflected on her title, one that she says had a major impact on her career.

“I think at that time it really made you a somebody when you won,” said Streit of her win in 1956.

Of course the 86-year-old also won the national amateur crowns of Britain, Australia and Canada, a feat that no other player has managed and that led her to a spot in the World Golf Hall of Fame. She is arguably Canada’s most decorated golfer.

Her victory came at the Meridian Hills Country Club in Indianapolis, Ind., where she was one of 116 entries. Streit had enjoyed a stellar summer, winning the U.S. intercollegiate title as well as the Ontario Women’s Amateur, the Canadian Amateur, the North and South Amateur and the Jasper Totem Pole.

Streit faced off against 17-year-old JoAnne Gunderson in the final, who later became JoAnne Carner and went on to win 43 times on the LPGA Tour. Earlier that summer, Gunderson had won the U.S. Junior title.

By stature, it appeared to be a mismatch. Gunderson was an imposing 5-foot-7 and 150 pounds, while the diminutive Streit was at least seven inches shorter and gave up 40 pounds.

Off the tee, Gunderson would power the ball past Streit’s drives, in some cases by 100 yards.

“In later years, I’d ask her how she knew it was 100 yards,” said Streit,” and she said she would pace it off. I told her she should have been focused on the next shot, not pacing off the drives. We had a good laugh with that.”

Despite the distance gap, the Canadian refused to let up. She would often hit a four-wood for her second shot and end up closer to the pin than Gunderson, who would use a seven-iron. That would also frustrate the American star.

Streit fell behind by a shot in the opening 18 holes, and dropped three consecutively in the second round to fall into a deep hole. But the feisty Streit fought back, winning back two holes by chipping in and then holing a 45-foot putt. Carner appeared rattled and lost two more, one after driving into the rough and the other after three-putting.

Streit regained the lead after 32 holes, and on the 35th hole she drained a putt from 12 feet to close out the match 2 and 1. By winning six of the last 10 holes, Streit claimed her crown.

Remarkably, the two players met again in the final 10 years later. The match went to extra holes before Gunderson – by then Carner – eked out the victory on the 41st hole.

These days the two golfers are fast friends and play regularly at their Florida homes, recounting their many matches and laughing at the good times they shared.

“We talk every day,” stated Streit, whose amazing career will be recounted in a new multi-channel golf platform called Keeler1930 this fall. “She is an amazing friend and absolutely wonderful to golf with.”

The Canadian players at this year’s U.S. Amateur, which will wrap up on Sunday afternoon, failed to advance to the match-play portion of the competition.

But before they started, Streit reached out to wish them well and hope that they would follow in her footsteps. It’s something she’s done for years, inspiring fellow Canadians, including today’s LPGA stars Alena Sharp and Brooke Henderson.

“It’s a great, great tournament,” reflected Streit of the U.S. Amateur. “I’m proud to have been a champion.”