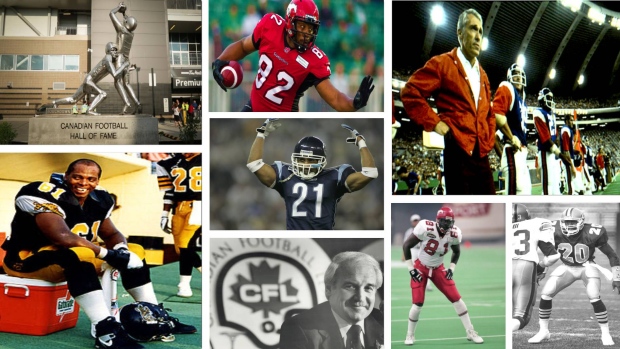 The Canadian Football Hall of Fame will be opening its doors for seven more in 2021.

The Hall announced its Class of 2021 on Tuesday with players Will Johnson, Nik Lewis, Orlondo Steinauer, Mike Walker and Don Wilson, and builders Marv Levy and Doug Mitchell set for enshrinement in Hamilton.

Johnson was a mainstay on the Calgary Stampeders’ defensive line in the late-‘80s to mid-‘90s. In his eight seasons with the Stamps, Johnson was a CFL All-Star on five occasions and was a part of the Calgary team that won the 80th Grey Cup in 1992. A native of Monroe, LA, Johnson finished up his career in 1997 with the Saskatchewan Roughriders.

A member of the Pro Football Hall of Fame (Class of 2001), the legendary Levy will join Warren Moon as the second person inducted to both Halls of Fame. Born in Chicago to a family originally from Montreal, Levy became the head coach of the Alouettes in 1973 and held the role for five seasons. In his half-decade with the Als, Levy reached three Grey Cups and led the team to championships in 1974 (62nd Grey Cup) and 1977 (65th Grey Cup). Levy won the 1974 Annis Stuskus Trophy as the CFL’s coach of the year. Returning to the NFL in 1978, Levy would go on to take the Buffalo Bills to four straight Super Bowls from 1990 to 1993.

Mitchell served as CFL Commissioner from 1984 to 1988. A native of Calgary, Mitchell was appointed to the Order of Canada in 2004 and inducted into the Alberta Sports Hall of Fame in 2007. Mitchell still serves on the CFL Board of Governors and is the father of Hamilton Tiger-Cats president Scott Mitchell. Mitchell appeared in one game for the BC Lions in 1960.

The current head coach of the Ticats, Steinauer had a decorated career during his playing days. A native of Seattle, Steinauer spent 13 seasons in the CFL as a safety and special teams player with the Ottawa Rough Riders, Ticats and Toronto Argonauts. Steinauer’s 49 career interceptions is second-most in CFL history. Five times a CFL All-Star, Steinauer won Grey Cups in 1999 (87th) and 2004 (97th) and a third in 2012 (100th) as a member of the Argos coaching staff. In 2019, Steinauer won the Annis Stuskus Trophy as the CFL’s coach of the year after the Ticats went 15-3, giving Steinauer the most ever wins for a rookie coach.

A product of Washington State, defensive tackle Walker spent a decade in the CFL with the Ticats and Edmonton from 1982 to 1991. Born in Indianapolis, Walker was named a CFL All-Star on three occasions. In 1986, Walker was a member of the Ticats team that captured the 74th Grey Cup. After his retirement, Walker served as the defensive line coach for several seasons with Edmonton.

A date for the 2021 induction ceremony has yet to be announced.

The 2020 induction ceremony was postponed due to the ongoing COVID-19 pandemic. Clyde Brock, Freddie Childress, Henry Burris, Greg Vavra, John Hufnagel and Larry Uteck were announced as the Class of 2020 last June.