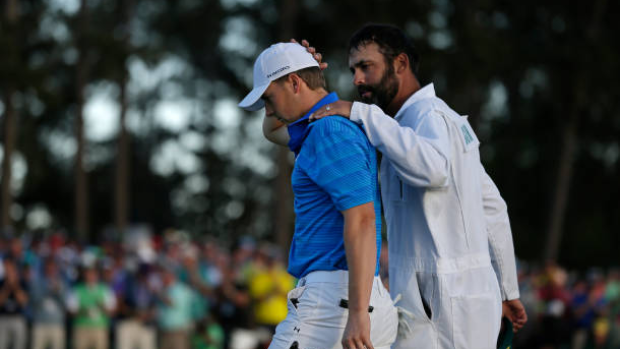 There have been many shocking moments in Masters history. It’s part of what makes the tournament so great.

All were remarkable in their own way and left us stunned.

But no Masters fell apart so quickly and spectacularly as Jordan Spieth’s in 2016. It all came undone in one hole over 15 remarkable minutes.

To understand this epic fall, we need to go back two years.

In 2014, Spieth made his Masters debut on the strength of winning the 2013 John Deere Classic just two weeks before he turned 20.

He shared the lead with Bubba Watson after 54 holes, trying to become the first player to win the Masters in his maiden appearance since 1979. He settled for a runner-up finish but stamped his place as a future contender.

A year later, Spieth opened with a 64 – just one shot off the course record – and never looked back on his way to victory. For the week, he made a record 28 birdies, finishing at 18-under to tie the low 72-hole score.

When he arrived at Augusta National in 2016, Spieth had an impressive resume that included seven PGA Tour victories, including U.S. Open and the Tour Championship. He was easily the odds-on favourite to defend his title.

Despite tough conditions that saw him post over-par scores in rounds two and three, Spieth led by one heading into Sunday. He raced out of the gates with birdies on the final four holes of the front nine and headed to the back with a five-shot lead.

Back at our TSN set, we began preparing for the Spieth coronation. We pulled footage of Jack Nicklaus, Nick Faldo and Tiger Woods, the only three players to defend their Masters titles. We confirmed that it would be Augusta National chairman Billy Payne who would slip the jacket on Spieth.

In our minds, it was going to be clear sailing and we’d have a good two hours to get our story together as Spieth caroused through the back nine.

All that was about to change. Spieth started the back nine with bogeys on 10 and 11. Those he could get away with. But he would never overcome what came next.

Spieth stood on the 12th tee with his caddie, Michael Greller, discussing the shot on the infamous hole. They picked their target, a CBS camera situated between the two bunkers, 20 feet left of the flag.

But over was not the problem. The tee shot was right of its intended target, perhaps pushed by the breeze, and it was short. It hit the bank and rolled down, plopping into Rae’s Creek.

Spieth walked back to his bag, head down, and casually slipped the club back inside. If that swing was a shock to the patrons, what happened next was simply jaw-dropping.

Spieth sought out a comfortable yardage and dropped his ball. It should be an easy wedge to the green and a possible one-putt for a bogey. That would keep him in the hunt. But his next shot was fat, a large piece of sod flying up and his ball barely making it to the near side of the creek.

His third attempt was better in that it at least made it across the water, but it came to rest in the back bunker.

When he finally extracted that and got it into the hole, he’d recorded a quadruple-bogey seven.

Back on our set, there was a furious reset happening. Players we really hadn’t even considered were suddenly in the hunt. We had to learn as much as we could as fast as we could about golfers such as Soren Kjeldsen, Matthew Fitzpatrick and Danny Willett.

This type of thing happens in golf as leads change and players move up and down the leaderboard. But this? This was not a day we thought that would happen. A five-shot lead erased in three holes from a player who had owned the course for the previous seven rounds.

Despite making some birdies coming in, Spieth could do no better than a two-under score for the four rounds, good for second place. Willett posted a splendid final-round 67 to earn the Green Jacket and even he was having a hard time comprehending what had happened.

Yes, it was. Our post-round program was filled with shaking heads and how-to-make-sense-of-this commentary. We were as stunned as all the fans.

Even with all the remarkable moments over the previous 79 editions of the Masters, this one might have been the craziest.