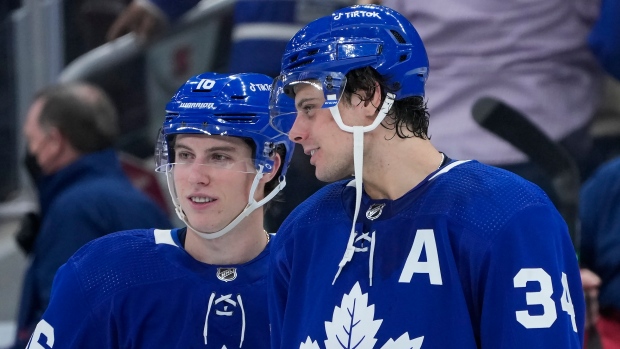 Mitch Marner will be out three to four weeks with a shoulder injury sustained via a collision with teammate Jake Muzzin during Friday's practice. Initially, the right winger was expected to be out only a few days, but an MRI showed the issue was worse than anticipated.

"He'll be back on the ice probably sooner than later," head coach Sheldon Keefe said. "We'll be cautious with it, of course, and make sure that he's ready."

The Leafs went winless (0-1-1) in two games without Marner over the weekend. Where do they miss him the most?

"Everywhere," said left winger Alex Kerfoot. "He's on the ice the whole game. Everyone has to step up. No one guy is going to fill that role. We got to do it as a group."

Marner averages 20 minutes and 47 seconds of ice time per game, which leads all Leafs forwards this season.

Jason Spezza saw a lot of time with Auston Matthews and Michael Bunting during the games in Minnesota and Winnipeg. Spezza also took Marner's minutes with the top power-play unit. The 38-year-old veteran produced two goals and an assist during the shootout loss against the Wild.

"Guys need to step up and fill that gap," said Keefe. "You saw what Spezz did in Minnesota. That's a guy stepping up."

With Spezza now expected to miss time due to a suspension, it was Wayne Simmonds slotting in beside Bunting and Matthews at the morning skate. The second line remained intact, with John Tavares between Kerfoot and William Nylander. Nick Ritchie joined David Kampf and Ondrej Kase on the third line.

"It gives me the availability to move people around still, which I suspect we will," said Keefe. "Auston's going to have a lot of different linemates tonight."

Kase is on pace for 21 goals and, on paper, looks like the most compelling candidate to move up and play in Marner's spot. Keefe acknowledged he was tempted to move the 26-year-old into that spot. Ultimately, he decided to keep Kase, who just returned from a three-game absence, alongside his good friend Kampf.

"We tried Kase with Auston in our game in Buffalo [Nov. 13] and talking to Ondrej after, he didn't feel like himself in that game and he was a little out of his comfort zone," Keefe revealed. "I learned pretty quickly that he's a guy that likes comfort and consistency and reliability so, especially coming off of his injury, that's really important. Also, that's an effective line for us and an effective duo, so you take away from that then you have another hole somewhere else."

Kase will take Marner's minutes with the top power-play unit. He was in the bumper spot with that group at the morning skate with Matthews and Nylander on the flanks.

"We used him on the second unit the other night and we liked some of the things he offered there," Keefe said. "He maintains the right shot and that brings a level of familiarity for that unit with the way the handedness of the players works out."

Columbus is eighth in penalty-kill percentage this season (84.1).

"It makes life miserable for me on my own team, to be honest, in practice," agreed Jackets forward Max Domi. "It's not fun to play against. They're so good. Guys like Sean Kuraly, [Eric] Robinson, Boone Jenner, I mean, they don't stop. They're on the puck. They hound it."

The absence of Spezza and Rasmus Sandin, who left Sunday's game with a knee injury, is a big blow to Toronto's second power-play unit. Simmonds will now join that group as the net-front presence pushing Ritchie to the flank. Jake Muzzin becomes the quarterback.

Sandin and Spezza key cogs on that unit pic.twitter.com/Cd6EUicBk8

Sandin couldn't put any weight on his right leg after taking a knee-on-knee hit from Neil Pionk on Sunday night.

"We got good news on Rasmus, or I would say better than we were expecting," Keefe said. "He's had an MRI as well and the results came back positive in the sense that there's no real structural damage to his knee."

Sandin wasn't the only Leafs defenceman to get hurt on the recent road trip.

"Travis Dermott also has a shoulder injury that doesn't appear to be as bad as Mitch's but certainly bad enough that he's not available," said Keefe.

Asked for an injury update at the start of his media availability, Keefe cracked a smile.

"You may have to cue me on some of them," he said.

With the injury bug biting hard for the first time this season, the door has opened for a couple of undrafted prospects to make their NHL debuts. Alex Steeves, a 21-year-old Notre Dame product, will skate on the fourth line with Kyle Clifford and Pierre Engvall. Kristians Rubins will slot in beside Timothy Liljegren on the third defence pair.

"Any time it's someone's first game there is excitement for them, and it resonates throughout the group," said Kerfoot. "You always like to see those experiences and be a part of them and it breathes new life into the group."

Steeves missed training camp due to injury but has been red-hot since returning with the Marlies.

"Not too much," said Nylander when asked what he knows about Steeves. "I've only seen, like, a couple highlights. I think he's pretty fast from what I've seen. Scored some nice goals, so that's probably the only thing I know."

Rubins, meanwhile, has worked his way up from the ECHL where he spent time with the Newfoundland Growlers during the 2018-19 season.

"He really earned the respect of the group here, not just me, but [assistant coach] Dean Chynoweth and the rest of the coaching staff, and has done a good job with the Marlies," said Keefe. "We have some other options there as well, but it's a good opportunity for him that we're excited to give to him."

"Big boy," said Nylander of the 6-foot-5, 227-pound Latvian. "Heavy in the corners. I know that from training camp, so it will be fun to see him out there."

Matthews called the third period in Winnipeg on Sunday "a gong show." The Leafs believe it all started unravelling when Pierre-Luc Dubois wrestled Matthews to the ice and referee Brad Meier decided to take both guys to the box.

"That situation should've been [one] penalty," said Nylander. "I don't even think Auston was doing anything. Weird situation. The game got out of control from there."

Keefe was asked if the NHL needs to do more to protect stars like Matthews.

"Those guys get a lot more attention on them so, therefore, there would be more opportunity for calls," the coach observed. "If I'm not mistaken, I don't think Auston's drawn a penalty the entire season, which is strange considering how much he has the puck and how involved he is. So, those kinds of things are worth looking at if you're involved with that."

Per NaturalStatTrick.com, Matthews has only drawn one penalty during five-on-five play this season.

Did Nylander check to see when the Leafs and Jets play again?

"I saw it already," he confirmed with a grin. "We'll see what happens."

The Leafs host the Jets on March 31.

Nylander is close with Sandin, his summer training partner, and found it hard to watch him leave the ice in pain on Sunday.

"Obviously, you wish something would've happened out on the ice, like a penalty or something, but what happened, happened," he said. "We'll move on until we play them later on."

Vladislav Gavrikov approached Domi at the Jackets morning skate and struck up a conversation about their duel in the 2015 World Junior gold-medal game, which was played at Scotiabank Arena.

"That was awesome," Domi recalled. "That was one of the highlights of my career. The last couple times I've come out here I haven't really thought about it, but Gavvy reminded me. We were talking about who was on his team and who was on my team. Two really good teams with a lot of guys in the NHL."

Canada held on to beat Russia 5-4 in a crazy championship game. Every member of the Canadian team has gone on to play in the NHL. Domi used the word "spectacular" to describe that roster.

"It's crazy to think it's almost seven years ago now," Domi said. "Time just flies. It's been a good run."

It's been a while since Domi got to play in his hometown where his father, Tie Domi, was a fan favourite back in the day.

"It's always fun," the 26-year-old said. "It's definitely a game I look forward to every year. Family and friends and everyone gets pretty excited. This is where I grew up. All the ushers and everyone, security, it’s always great to see everyone. It’s equally exciting for them. It feels like yesterday I was this big. I didn’t grow that much, but a little bit."

Petr Mrazek (groin) rejoined the Leafs at Tuesday's skate. He started on Sunday with the Marlies as part of an AHL conditioning stint.

"We'll continue to build him up and get him to the point where he's ready to play an NHL game," Keefe said.

Joseph Woll will dress as the backup goalie tonight.