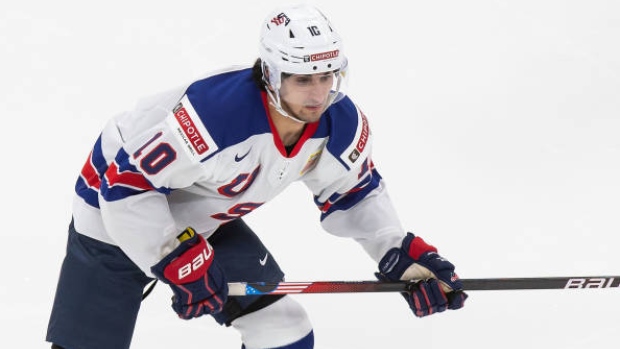 Has Matthew Beniers ever been tired during a game?

"Yeah," the Michigan Wolverines centre says with a chuckle.

But then he pauses for a second.

It rarely seems that way. The 18-year-old from Hingham, Mass. is known for his non-stop motor.

"It's a little bit from when I was a little kid," Beniers explains. "I was extremely energetic. My mom said I was always the one running around and making noise and doing something. And then she was like, 'Alright, let's just put him into hockey.' My dad wanted to do that for a while so she was like, 'Alright, fine.' So, they put me into that and then I was always running around the ice going full speed at all times and that's just carried on and that's kind of how I am now. I never really run out of energy. I'm always going."

That boundless energy has carried Beniers to the top of the National Hockey League draft class. TSN director of scouting Craig Button has Beniers going second overall to the Seattle Kraken in his latest mock draft. It also earned Beniers an invitation from USA Hockey to the recent men's World Championship. Beniers spoke to TSN about his experience in Latvia and where he feels his game has developed the most this season.

What will you remember most about your experience at the World Championship?

"Just being around a bunch of pros. It was awesome. I got to make a lot of new friends and play at a high level of hockey. It was a really exciting time for me."

Did you have a welcome-to-the-Worlds moment?

"I'd probably say scoring that goal. You know, my first goal was pretty cool. Brian Boyle almost jumped on me and it was pretty special. He said, 'I think I went crazier about your goal than I did for my goal.' He was awesome and that was of the highlights of the trip for me."

What's one thing you learned from a teammate or coach that stood out?

"The NHL is a tough place. You got to work hard to get there. You just got to keep playing your game and stay confident with yourself and keep moving along and I think that is one message that was passed along from a lot of guys."

What does playing at the World Championship do for your confidence?

"It was a good experience in that sense. I was able to play with a lot of really good guys and play against a lot of great guys and just knowing that I was able to hold my own and play with those guys was a confidence boost. I got a long way to go still. I got to get bigger and stronger and work on a lot of things, because those guys are all really good. They're all pros on and off the ice and I got a little ways to get there, but it was nice to see where I'm at and see how those guys are like on and off the ice and try and emulate them moving forward."

What's something you saw off the ice that you'd like to emulate?

"They work hard after games, after practising, just getting on the bike and stretching and treating their body right. They do good nutrition. Also, how they handle themselves outside of the rink is very professional. The way they handle themselves when they see fans is pretty cool ... they're always happy to greet a fan or give an autograph or anything they can do for someone else. That's kind of what I saw off the ice and I just really hope I can be like that some day."

There was some concern when you hurt your right ankle in the quarterfinals, what happened?

"I just sprained my ankle ... I feel really good right now. It stinks that happened and I wasn't able to finish the tournament with the team, but I was grateful that the guys were able to get bronze and we were able to come home with a medal. That was really exciting and, yeah, just working to get back soon."

Matty Beniers just went hard into the boards. He can't put any weight on his right ankle.

What do you remember most about that World Juniors experience?

"That was amazing. Winning gold was awesome. Being in the US-Canada game, obviously, they had an amazing team and it could've gone either way and we ended up coming out on top that night. It was really special for us. It was one of the coolest hockey moments that I've ever had in my life, especially after we won and celebrating with your teammates, standing there on the blue line and hugging your teammates and singing the national anthem like that, it was goosebumps in the moment. So, it's really cool to think back on it and be like, 'Wow, that actually happened.'"

One of your World Junior teammates, Cole Caufield, is putting on a show in the Stanley Cup playoffs. What do you think of what he's been doing with the Canadiens?

"Oh, he's been great. He's adding the element he does on every team: he's a goal scorer. He makes plays out there and that's just what he's doing. He's locked in and he's playing his game. He's playing with confidence and that's great to see, especially as a young guy."

Where do you feel your game has grown the most this year?

"I'd say probably my scoring touch or my scoring ability. That was something I started to focus on early this year. I worked a lot with the Michigan coaches and guys in practice ... and I ended up putting some in the back of the net this year, a good amount. So, that's one thing that I was working on this year and I saw some results so that was really nice."

Yeah, you tied for the team lead with 10 goals in 24 games. What did you do better to score more?

"Just shooting every day and when you're shooting in practice really focusing on shooting to score. I know everyone says that, but when you're really dialled in in practice it becomes second nature in a game. And just working on your deception and trying to shoot different ways on goalies when you're coming down. That was the biggest thing. With Cole, he does a great job of that. He shoots from everywhere and so quick and those are the things you got to work on to be able to score."

The chemistry with linemate and follow top prospect Kent Johnson certainly helped. What stands out about him?

"The first week I got on campus, I didn't know Kent ... I remember texting my dad and I was like, 'Dad, he's super skilled!' That's how I described him and I stand by that. He's one of the most skilled kids I've played with. He's skilled. He's smart. He moves the puck well. He's a good playmaker. He can score. He has all that offensive stuff and then this year he was really good defensively too. I don't think people give him enough credit. He was back on defence, back checking, blocking shots and winning battles. He does a lot of stuff that goes under the radar. If you really watch him closely, he does the little things right."

You also experienced success off the ice posting a 3.86 grade-point average, why is school important to you?

"It's just kind of always been a value of my family. My sister went to Cornell. My parents and my brother went to Williams [College], a great school in Mass, so it's always been a focus. My parents always stressed that you can do well in hockey, but you always have to do well in school so that's how I've been growing up and I've carried that on into college. I like to do well. I like to learn. It's something I take pride in along with hockey."

Wrapping up his freshman year with a 3.86 GPA with intentions on being pre-med, Beniers excelled in both the classroom and on the ice. #GoBlue | #SARCAwards pic.twitter.com/By15fW10gW

"When I was little I wanted to be a vet, because I loved animals. And I really liked the idea of doing surgeries and things like that. Once I started taking science and chemistry classes, I really enjoyed learning in those classes and it kind of came easy so I figured that'd be a good path for me even if that never happens. I don't know what will happen with that, but I might as well take the classes I enjoy and like learning about while I'm there."