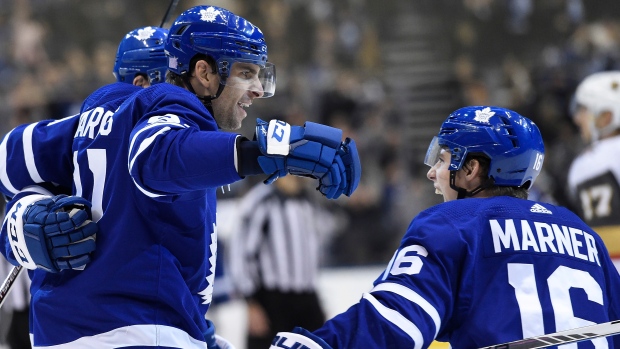 John Tavares celebrates his OT winner against Vegas on Thursday. , The Canadian Press

TORONTO – The Maple Leafs were 0-for-5 on the power play and trailing the Vegas Golden Knights 1-0 late in Thursday’s game when Auston Matthews had finally seen enough.

So, during a timeout before the Leafs’ sixth power play of the night, Matthews convened with Toronto’s top unit and put in motion a new plan that spawned during the second intermission. And it worked to perfection – Matthews potted the game-tying goal for Toronto to help force overtime, and the Leafs went on to top the Golden Knights 2-1 on John Tavares’ game-winner from Mitch Marner.

“We were a bit stagnant [on the power play],” Matthews explained afterwards. “So in the third, I pretty much said, 'what do we have to lose? Let's move around, let's get their penalty kill thinking more.’ And I thought we did a really good job, having different guys going into different areas and just reacting and playing off our instincts. Not just drawing up plays but reacting off one another and then using each other and making plays to spread them out a little bit and we were able to score.”

The victory was Toronto’s third straight, marking their longest win streak of the season and potentially a turning point in what’s been a difficult run on special teams. Before Matthews scored, the Leafs were 1-for-24 on the power play over six games, but a bit more improvisation could go a long way in turning those numbers around.

“We went through a little drought there; it was tough throughout the middle,” said Marner, who finished the game at plus-1 with an assist. “I think with the skill we have, if we move around the o-zone when we have a chance, it's going to screw a lot of PKs up. I think that's what kind of gave us our opportunity there ... making guys run around all over the place.”

But while Matthews’ goal was a major factor in the Leafs’ end result, they wouldn’t have been in a position to reach overtime if not for the stellar goaltending of Frederik Andersen.

For most of regulation, Andersen was the Leafs’ only star. He matched Malcolm Subban at the other end by turning aside all comers in the first two periods, the second of which was particularly rough for Toronto. While the Leafs were the better team in the opening 20 minutes, Vegas held Toronto without a shot until nearly 15 minutes had gone by in the middle frame, a stretch that included a woefully ineffective two-minute power play.

And that wasn't the only poor man advantage Toronto produced, either. Before Matthews broke through, the Leafs’ power play rarely looked like the weapon it should be, marred by sloppy drop passes, limited shooting threats and slow puck movement.

Things were so bad after Toronto’s third unsuccessful try that audible boos rained down from fans at Scotiabank Arena.

“At times I think our execution wasn't great,” admitted Tavares. “But I think we also had a lot of looks on net, we put a lot of pucks there and sometimes it's just getting those second and third opportunities and I think on the last power play [when Matthews scored] that's what happened, we got some pucks to the net, got some looks, and we kept retrieving and retrieving them and then finally able to wear them down.”

But before that, Vegas had snatched a lead off Max Pacioretty’s ice breaker early in the third period, a gift of a goal created by Cody Ceci's turnover directly in front of Andersen. That would end up being the only blemish on an otherwise terrific outing for the goaltender, who was also the Leafs’ best penalty killer as they went 3-for-3 shorthanded against Vegas’ seventh-ranked power play.

“The amount of saves he made in key moments, he gave us a chance to win it,” Tavares said. “It was a hell of a night by Fred.”

Indeed, even after Matthews’ big goal, it was Andersen who ultimately secured his team at least a point. When the Golden Knights went to a late power play in the third, Andersen made two massive saves on Jonathan Marchessault to get Toronto to the buzzer, and then added a couple more big stops as the power play ended in overtime, finishing the night with 37 saves.

“Those were some big saves from Freddie there, probably by far our best player on the ice tonight,” Matthews said. “He just kept us in it.”

“I felt like the puck was following me a little bit around so it was a good feeling,” Andersen added. “Obviously, you're going to have different nights where the puck seems to bounce your way, so it feels good.”

Now Toronto would like to keep the good times rolling. Players credited their recent Halloween party as an important bonding experience – they’re undefeated ever since – and building that crucial chemistry off the ice is starting to spill over and pay positive dividends on the ice for Toronto, too.

“I think the biggest thing is we're getting to know each other,” said coach Mike Babcock. “I don't know if anyone believes it, but it's easier to play with people you know. It appears that the guys are starting to have more fun, interacting more. I see more abuse, and I think that's a great thing, once you have fun having fun together. That's once you get to know each other.”