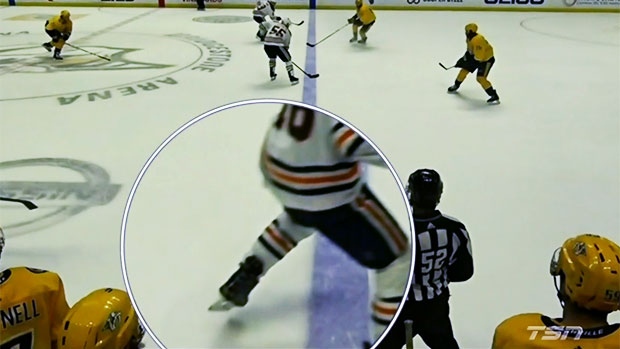 The Edmonton Oilers suffered their seventh defeat their last eight games with a 2-1 loss to the Nashville Predators on Tuesday night.

And it might have been 2-2 late in the third period if not for an offside call about 40 seconds before the apparent equalizer was scored.

Edmonton's Mark Letestu appeared to backhand the puck in front in the Predators net past Pekka Rinne with five minutes remaining in the game, but the play was challenged by Predators head coach Peter Laviolette for an offside and it was determined Jujhar Khaira's left skate was off the ice in the neutral zone as he entered the Nashville zone ahead of puck-carrier Ryan Strome.

Oilers captain Connor McDavid said he would like to see the NHL remove offside challenges.

"Ultimately, I feel that they should just take the rule out," McDavid told reporters after the game. "I think the number of calls that are a millimetre offside 45 seconds before the play, it doesn't have very much of an effect on the goal itself.

"I think the fans want to see offense and if that's going to hold back offense, it's very frustrating. It's very hard to sit here and question the rule right now because it's obviously a little sensitive with it going against us, but I think it is something that I hope they take out."

NHL GMs tackled this last March at GM meetings but couldn't find consensus on the skate off the ice, over the blue-line, even though I remember league hockey ops was pushing for change on that particular play (skate off the ice over blue-line)... https://t.co/JONTXiPxsi

"Lawrence, that guy he must have a surgeon's eyes," Rinne said. "He sees when the skate blade is up. He doesn't get enough credit. He's the hardest-working guy in this organization."

The coach's challenge has been in place in the NHL since 2015. This season, the league implemented a two-minute penalty for delay of game after failed offside challenges.

NHL Director of Hockey Operations Colin Campbell told TSN Hockey Insider Pierre LeBrun in The Athletic on Wednesday that he intends to bring up tweaking the offside rule at the next GM meetings in March.

"I think I’ll try to buy the managers over again as a group," he explained. "People might say, 'Who cares about one inch?' A whole city would care in the playoffs about one inch if it was off-side. That’s why we have the off-side coach's challenge.

"But I'll try it again. Because I think it’s an adjustment to this rule that we experienced. This is our third year with it where I think we’ve experienced it enough where you can put some goals back on the board. The basis of it is, the player is still onside because he hasn’t crossed the blue-line. I don’t think you need to be touching the ice."