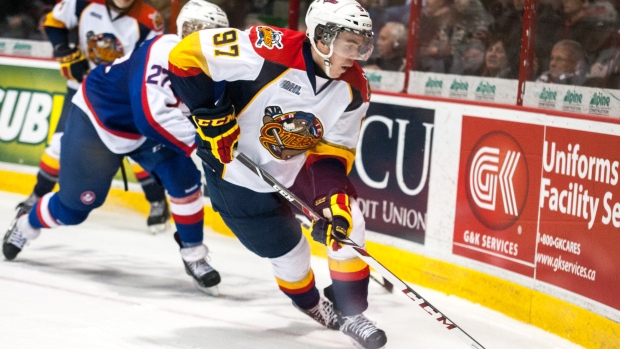 Ten out of 10 NHL scouts surveyed by TSN have Erie Otter centre Connor McDavid as the No. 1 prospect for the 2015 NHL Draft.

It's not at all surprising McDavid tops TSN's mid-season ranking - he was No. 1 on TSN's pre-season list in September, too - but three of the same 10 scouts surveyed in the fall had Boston University centre Jack Eichel at No. 1.

In the intervening five months, all three have switched over to McDavid.

"It's not that Eichel has played poorly - quite the contrary, he's been very good," said one NHL scout who made the switch. "It's just that McDavid has taken it to another level - before his (broken hand) injury and after (at the World Junior Championship) too."

Another added that the World Junior tournament was the defining difference for him.

"It was the biggest stage to date, a head to head matchup and McDavid was better than Eichel," the scout said. "They're both franchise players - Eichel is going to have a tremendous career and he could still turn out to be as impactful as McDavid - but you have to hand it to the (McDavid) kid, he was under enormous pressure to deliver and he hasn't left anyone disappointed. That's the ridiculous thing.

"McDavid has had to deal with unreasonably high expectations and he's still managed to exceed them. It would have been easy to come up short. He hasn't."

Going into Thursday's game against the Peterborough Petes, McDavid had 23 goals and 66 points in only 25 games.

Another scout, who had McDavid No. 1 in both the pre-season and mid-season polls, said he's been impressed and surprised with some less heralded parts of McDavid's game.

"We all knew about the speed and skill and vision," the scout explained. "But what really stood out for me at the World Juniors was how committed he was to playing without the puck, being on the right side of the game defensively, making a real effort to be a complete player.

"His ability to steal the puck, to retrieve it, win battles and put his team back in possession is the part of his game that surprised me."

Eichel also earned rave reviews for his productivity as a true (18-year-old) freshman playing against older, more mature competition. He has 13 goals and 36 points in 22 games and is second best in total points and points per game for all of U.S. college hockey.

"Eichel's combination of speed, skill, power and size is still really something," a scout said. "There's no doubt, he's going to be a premier No. 1 centre (in the NHL)."

There was no surprise at No. 3 on TSN's mid-season ranking. Boston College freshman Noah Hanifin was in that slot in September and remains there. Hanifin, by all accounts, showed some inconsistency early in the college season, but reaffirmed his high ranking with a solid outing at the world juniors. Only one of 10 scouts surveyed didn't have the mobile, puck-moving defenceman at No. 3, dropping him to No. 4. The consensus, though, is quite clear that next to McDavid and Eichel, he's the premier prospect available.

"We usually debate the top three picks in any draft for quite some time at our scouting meetings," one scout said. "This year, it took about one minute to say, McDavid-Eichel-Hanifin and there was no debate. We moved on to who's No. 4 almost immediately."

The margins between those three players from No. 4 through No. 6 are incredibly tight and there's considerable debate amongst scouts over which order they should appear. Suffice to say a team's personal preference on issues such as size and skill will go a long way towards determining which order they get drafted. But these three are the clear consensus options beyond McDavid, Eichel and Hanifin.

Strome is the big centre every NHL team looks for. His vision, playmaking ability and productivity (30 goals and 85 points in 45 games) are elite. But some scouts caution there's no dynamic quality to his game (no "wow factor," as one scout put it) and that he doesn't possess the extra gear or pace that separates McDavid and Eichel from the rest of the field. Still, Strome is the top available pivot next to the Big Two.

Marner has plenty of "wow factor" - a dynamic and creative offensive wizard who makes everyone on the ice better and has the ability to finish plays himself. But at 160 pounds and still under 6 feet, some wonder how well those skills will translate to the pro game. Some scouts cite former Knight Patrick Kane as a comparable, if only because they're both undersized scoring wingers who played in London. Most scouts believe Marner has that special quality that will allow a 160-pounder to thrive and survive in the NHL game, but there's still concern from some over his size.

Crouse, meanwhile, has the physical tools required to play an NHL power game right now. As he demonstrated at the World Junior Championship, he moves extremely well for a big man, protects the puck like a seasoned professional, is a first-rate penalty killer and offers a physical dimension that every NHL team wants and needs. And while he's scored 16 goals in 32 games (on pace for a 34-goal year if he had played every game) on an offensively challenged Frontenac team, the fact he has only 23 points has raises the issue of whether he's projected as a top-line NHL talent, or whether he just looks good playing alongside top point producers.

"The whole Strome-Marner-Crouse debate is fascinating," one scout said. "I think they're all going to be very good NHL players, but there's a different question mark on each of them."

If we're to interpret the voting results of the scouts surveyed by TSN, there's an elite tier of three at the top (McDavid, Eichel, Hanifin) followed by a secondary tier of three more (Strome, Marner and Crouse) high-end prospects. Then comes a third tier of six prospects, filling in the Nos. 7 through 12 slots. Czech winger Pavel Zacha of the Sarnia Sting - with a blend of speed, size, strength and skill - is No. 7, though he's currently injured and expected to be out until sometime next month.

University of Michigan freshman and offensive defenceman Zach Werenski is No. 8, 6-foot-3 Finnish winger Mikko Rantanen (who scored four goals - half of Finland's total goals - at the WJC) is No. 9, Seattle Thunderbird offensive centre Matthew Barzal (who has played only 20 games this season because of a knee injury and has only recently started playing again) is tenth, mobile puck-moving Swedish defenceman Oliver Kylington is No. 11, followed by Russian defenceman Ivan Provorov of the Brandon Wheat Kings (who played well at both the WJC and CHL Prospects game) in 12th.

TSN's rankings are compiled by surveying 10 NHL scouts and taking the consensus of those numbers to put together a list that, quite often, reasonably reflects at which point in the draft players will be taken. TSN's final draft ranking will be released in the week leading up to the NHL draft in Sunrise, Fla., June 26-27.

* For goaltender statistics, Goals-Against Average appears under the 'G' column, Save Percentage under the PTS column.