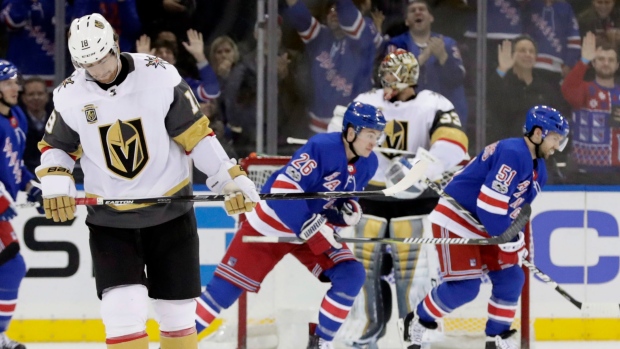 The Vegas Golden Knights are down to their fourth-string goaltender with Maxime Lagace set to start Thursday night, with emergency WHL call-up Dyland Feguson serving as back-up.

The team is without a timeline for the return of concussed goaltender Marc-Andre Fleury, while backup Malcolm Subban is expected to miss at least another two weeks and their first AHL call-up, Oscar Dansk, is out until at least next week.

Despite the team's bad luck in the crease, general manager George McPhee said Thursday the team plans to ride out the storm and not make a trade to bring in another goaltender.

"We'll ride it out with who we have," McPhee told Steve Carp of the Las Vegas Review-Journal.

McPhee said he's waiting to hear from doctors on Fleury's status, but the goaltender could be anywhere from three days to three months from playing. He has not been on the ice with the team since his Oct, 13 concussion.

Lagace, 24, stopped 32 of 28 shots in his first career start against the New York Rangers on Tuesday night.

After picking up Subban on waivers last month, the Golden Knights completed their first trade of the regular season, sending goalie Calvin Pickard to the Toronto Maple Leafs for a sixth-round pick and Tobias Lindberg. Pickard, who appeared in 50 games with the Colorado Avalanche last season, owns a 1-2 record with the AHL's Toronto Marlies this season, posting an .892 save percentage.