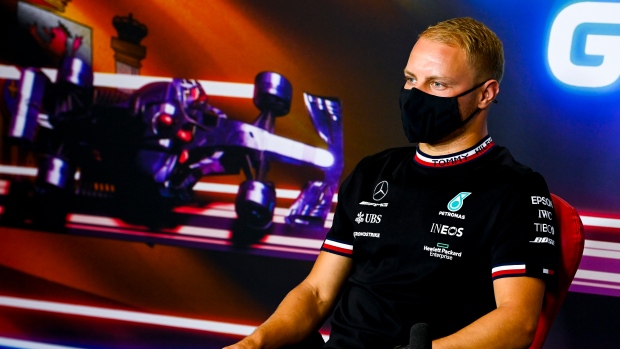 Mercedes Formula 1 driver Valtteri Bottas dismissed a report from the United Kingdom that he could be replaced by the team mid-season, calling it "bulls---."

“I know that I am not going to be replaced in the middle of the season,” Bottas said Thursday ahead of the Spanish Grand Prix.

“As a team we do not do that. I have a contract for this year, and I think there is only one team that does that kind of thing in F1 and we are not that.

“So no pressure from my side, as I know how things are.

“There is always bulls--- around but that is part of the sport.”

The team Bottas was referring to was Red Bull, who have promoted drivers from their sister team Alpha Tauri mid-season in the past.

Bottas has struggled so far this season. After finishing third in the season-opening Bahrain Grand Prix, the Finn failed to finish the second race of the season, in Italy, after a crash with Williams driver George Russell. Bottas earned poll for last week's Portuguese Grand Prix but was passed by teammate Lewis Hamilton and Red Bull's Max Verstappen, finishing third again.

Hamilton, meanwhile, has come to Bottas' defence, saying critics need to give him a break.

“If I'm really honest I think we have the best line up currently in terms of deliverables, in terms of the equilibrium we have within our team, and the general knowledge in terms of moving our car forward," Hamilton said Thursday.

“Valtteri just got pole the last race, it's only the fourth race, I think people need to give him a break and let him focus on doing what he's doing.”

Bottas has been teammates with Hamilton since 2017 when he replaced the retiring Nico Rosberg. Hamilton has won the champiobnship every year the two have been teammates, with Bottas finishing second twice (2019, 2020), third once (2017), and fifth once (2018). He is fourth in the standings through three races this season.

The 23-year-old Russell, who has impressed in his two-plus years at Williams, is part of Mercedes junior driver program.