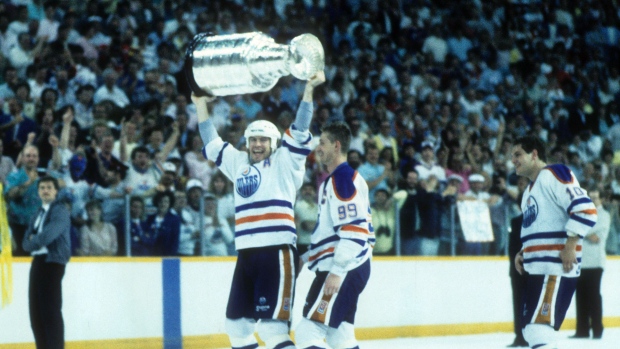 The Edmonton native was 11 when the shovels first hit the dirt in the city and 13 when it opened as Northlands Coliseum, housing the Oilers of the World Hockey Association. He still remembers watching as Gordie Howe came to town to play.

But Messier’s strongest memories of arena he called home for 12 of his 25 NHL seasons are tied to his time skating on the building’s famed ice, helping the Oilers win five Stanley Cup championships.

Now, Messier, along with countless other Oilers alumni and fans, will bid farewell to the arena as the Oilers play their final game at Rexall Place on Wednesday night.

Messier was drafted by the Oilers in the third round of the 1979 NHL Draft, after having spent one season in WHA.

His first game as an Oiler at Northlands Coliseum came on Oct. 13, 1979 - a night he has no trouble recalling.

“It was one of my favourite moments,” Messier told TSN.ca. “I scored my first goal on my mom’s birthday.

“She never missed a game.”

That goal, coming in a 3-3 tie against the Detroit Red Wings in team’s second game of the season, was the first of his 392 as an Oiler and 694 in the league.

Messier finished his rookie season 10th on the team in points with 33, well below the mark of his fellow 19-year-old teammate Wayne Gretzky, who racked up 137. The Oilers would finish below .500 and be swept by the Philadelphia Flyers in the first round of the playoffs.

The next season, however, things began to turn around in Edmonton. Glen Sather took over for Bryan Watson as head coach 18 games into the 1980-81 campaign and the Oilers won their first playoff series since joining the league with a 3-0 sweep of the Montreal Canadiens. Messier finished third on the team in points, behind only Gretzky and Jari Kurri.

The young Oilers then began to take the league by storm, amassing 48 wins in 1981-82 - with Messier scoring 50 goals for the first and only time in his career - then reaching the Stanley Cup Final in 1983, falling to the New York Islanders in six games.

The next season, the Oilers won a league-high 57 games and dropped just four games in the playoffs en route to winning their first Stanley Cup, on home ice, with a 5-2 win over the New York Islanders in Game 5. “Moose” was awarded the Conn Smythe Trophy as the team’s most valuable player in the postseason, though he says that designation didn’t mean a whole lot to him compared to the team’s victory.

“When you win, you look around the room and you say any one of these guys could have been the Conn Smythe Trophy winner because of their contributions throughout the year one way or another,” Messier said. 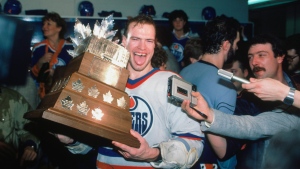 Instead, the six-time Stanley Cup Champion remembers the emotions of “fulfilling a childhood dream,” by bringing the trophy to his hometown.

Little did Messier know at the time, that championship would mark the first of his five in Edmonton, with each of the first four being won at Northlands. Reflecting on it, Messier acknowledges the added bonus of winning at home, which wasn’t on his mind at the time.

“I guess we came to appreciate it more,” said Messier. “We were just trying to win, we weren’t trying to choose where we could win. It definitely seemed to me to be more special at home because we were in front of our fans. Five of the six Stanley Cups I was involved with [1984, 1985, 1987 and 1988 with the Oilers and 1994 with the New York Rangers] were won on home ice - the only [road] one being in ’90 in Boston.

“I had that great luxury of being able to win on home ice and sharing it with all our fans.”

The impact of those fans is not lost on Messier, who remembers being one of them before his time with the Oilers.

“Edmonton, when we came into the league in ’79, was a real outpost for the National Hockey League,” Messier explained. “So we felt we were always kind of in it together with the fans and, of course, we all know we had lots to cheer about in those days.”

Rexall Place was known as Northlands Coliseum for Messier’s full tenure as an Oiler. In 1995, the named changed to the Edmonton Coliseum, which lasted three years before it was renamed again to the Skyreach centre. The name changed for the final time in 2003, though team's ice was always said to be among the best pads in the entire league, no matter the name.

Now, the Oilers will take to the ice at Rexall Place for the final time, against the Vancouver Canucks, closing the home portion of another disappointing season for the franchise, which has not reached the playoffs since 2006.

Messier will be among the former Oilers in attendance for the game and expects to feel a series of emotions in the building where so many of his biggest accomplishments took place.

Many of the Oilers taking the ice on Wednesday will be responsible for those new memories, including a young core of Connor McDavid, Taylor Hall, Leon Draisaitl and Darnell Nurse.

Once again, the Oilers are in the thick of the race for the first overall pick with just two games remaining, though Messier believes the future remains bright for franchise.

“It’s just hard to win,” Messier said of the current Oilers’ struggles. “It’s hard to win consistently and it’s hard to put a team together. The first thing you do when you’re rebuilding is try to amass as much skill a possible and they’ve done that.

“They realize now that the challenge is to build a team that can win — not only win, but win consistently and then sustain itself through four rounds of the playoffs. That’s a big ask, it’s very difficult and the teams that have gone through these rebuilds, I’ve said before, it’s not for the faint of heart.”

The Oilers have had the first-overall pick in four of the past six entry drafts, yet have not posted a points percentage mark in a season above .500 since the 2008-09 campaign.

“We’re all optimistic and we’re all hopeful,” Messier asserted, “The future looks very bright moving into a new arena and the players that they’ve amassed and take it from there.”

Messier was the fifth captain the Oilers named once the franchise joined the NHL, taking the “C” once Gretzky was traded to the Los Angeles Kings. This season, the team elected to keep the captaincy vacant for the first time. While McDavid remains a candidate to take over the leadership role, Messier cautioned the risk of handing the pressure to a young player.

“There’s risk giving it to anybody,” said Messier, who owned the role for three seasons in Edmonton and is considered one of the best leaders in sports history. “I’m always leery of putting that much emphasis and pressure on young players because it’s so important for them to just experience and have some fun and get to know and feel comfortable in their own game; feeling out the league and feeling out different arenas and travelling, learning how to live and manage the pro life – so there are lot of asks.

“On the other hand, there are some players that just seem predisposed to that kind of responsibility. You know, [Chicago Blackhawks centre Jonathan] Toews did it and never looked back. There are others who were named captain and didn’t handle it so well, so you’re always leery. But they will make the right decision.”

Messier was in Toronto this week to promote the Hoist the Cup Experience presented by Subway and Pepsi Co. The experience will allow fans to use a phone app to superimpose the Stanley Cup on a drink cup purchased at Subway. Fans can then take a picture of themselves virtually “hoisting the Stanley Cup” in the jersey of their choice.

“These kinds of promotions are the type of things that really engage the fans and encourage them to take the interest and follow the storylines,” Messier said. “That, to me, has always been the most important thing, that the fans are interested, not only with the on-ice product but the inspiration behind it and the players’ storylines.

“We’ve been able to touch a lot of fans through the years with pictures with the Cup, but there’s a lot of fans – millions – who have never had that opportunity.