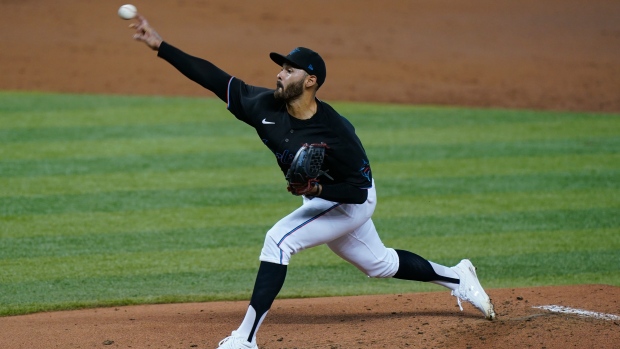 Miami returned to Marlins Park following a 23-day road trip, interrupted when 18 players and two coaches tested positive for the virus. After a week quarantined in Philadelphia, the Marlins resumed play at Baltimore on Aug. 4 and later travelled to New York to face the Mets and then to Buffalo to play Toronto.

The Marlins improved to 9-4.

“It’s not like a regular opening day. Usually an opening day is the building full, a lot of excitement, flyovers,” Miami manager Don Mattingly said. “It’s just not the same. I know it’s the home opener but it doesn’t like feel much of one.”

“We were really eager and excited to come home and play our first home game,” Lopez said. “It was fun to see the guys behind me making plays, and the aggressiveness on the bases. It was a really fun game all around. We hope to keep our foot on the gas.”

Magneuris Sierra’s bunt scored Eddy Alvarez from third in the fourth to give Miami a 3-2 lead. Berti added another run in the inning, stealing home on the front end of a double steal.

Miami stole three additional bases, including two from Jonathan Villar. Sierra also stretched a single into a double in the sixth.

“Speed is a difficult thing to deal with,” Mattingly said. “When you have speed it just puts a little bit of pressure everywhere. You know back to the same old thing, you can’t steal first. You have to have guys on base who can hit. We are building a club with more and more speed.”

Miami capitalized on Atlanta starter Kyle Wright’s wildness in the third for a 2-1 lead. Wright surrendered Villar’s RBI double and walked the next three batters.

“They’re foot loose and fancy free right now,” Atlanta manager Brian Snitker said of the Marlins. “They’re hitting the ball, taking the next base. You’ve got to make pitches. You can’t walk them.”

Adam Duvall’s run-scoring double tied it in the fourth before Wright (0-3) was chased after his sixth walk that started the bottom of the inning.

“It’s kind of been the story of the season so far, I’ve been coming out of the gates hot, pitching well those first couple of innings then having some road blocks in the middle,” said Wright, who threw 19 pitches in the first two innings before finishing with 65 in his three-plus innings outing. “I lost command. I beat myself today.”

Travis d’Arnaud hit a solo homer in the Atlanta first. The Braves will be without All-Star centre fielder Ronald Acuña Jr. in the series while he recovers from a sore left wrist.

Miami's Matt Joyce ran from left-centre and robbed Johan Camargo off an extra-base hit with his diving grab near the foul line in the sixth. Joyce also made a diving catch off Ender Inciarte’s sinking liner in the seventh.

“I felt like I ran forever,” Joyce said of his first catch. “When I looked up to see where the ball was, I was a lot closer than I thought. I said, ‘let’s give it a shot.’ You do what you can to help the team win.”

Some of the Marlins sidelined by the team’s coronavirus outbreak appear to be closer to rejoining the team, manager Don Mattingly said before the game.

“We do feel like in the next few days we’re going to have guys that are cleared to start working out,” he said.

The Braves became the first team to visit Miami, where following the strict protocols required of road clubs during the pandemic will be tested. Miami continues to deal with a spike in coronavirus cases the past two months.

"Everybody poked their head out of their room and maybe took a little stroll but everybody kind of hung close to the place,” Snitker said of his team’s first night at a local hotel Thursday.

Marlins: RHP Michael Morin was placed on the 10-day IL, retroactive to Thursday, with a right elbow injury and recalled LHP Josh D. Smith from the alternate training site.

Braves: LHP Max Fried (3-0, 1.59) will start the middle game of the series Saturday. Fried is 0-1 in four career starts against Miami.