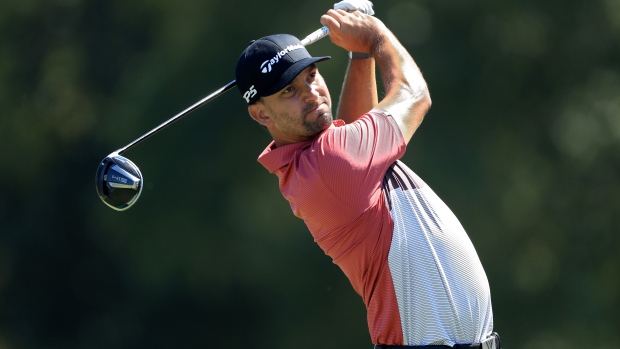 As a PGA Tour rookie last season, Michael Gligic was shortchanged in his year due to the tournaments cancelled by the pandemic. But he’s making the best of the opportunity as he begins his second campaign.

At the Sanderson Farms Championship, the Burlington, Ont.,-product fired an opening-round 65 to get into the clubhouse just a shot off the lead. It equaled the lowest score of his brief PGA Tour career.

“I just got the putter going,” said Gligic, who rolled in six birdies and an eagle on his day. “I think it started on No. 2. I think I made about a 10-footer and felt really good with the putter. And yeah, fortunately a few went in today.”

The greens at the Country Club of Jackson (Miss.), were speedy and that required an adjustment from Gligic after his opening hole where he hit his first putt five feet past the cup. He ended up second in Strokes Gained: Putting with a lofty mark of 3.659.

The highlight of his round came on the par-5 11th hole, where he hit his second shot from 245 yards, avoided the water on the right side and landed it 15 feet from the hole. The eagle putt slipped down a hill and into the cup, moving him to six under.

His only bogey of the round came on the next hole when his second shot came up short of the green and he failed to get up and down. He closed out with birdies on 14 and 16 to reach seven under.

Gligic is getting a second spin on the PGA Tour this year thanks to a decision by officials to give all those who didn’t remain inside the top 125 on the FedEx Cup points a second full year. As well, no players on the Korn Ferry Tour will graduate to the PGA Tour for the 2020-21 year. That’s given him a chance to adjust to the top circuit in golf.

“It's a whole different ball game as much as you want to simplify it and just say it's golf,” Gligic stated. “It's a little different out here on the PGA Tour. “It's just a learning curve for me, but I'm starting to feel pretty comfortable out here, and it's nice to see some of these golf courses for a second time. I think my caddie [David Markle] and I are doing a good job and starting to settle in.”

Gligic is working on some minor swing changes with instructor Sean Foley, who has been his coach since he was 12 and the two met at Glen Abbey Golf Course. Another coach and Foley associate, Ryan Corbin, also guides the 31-year-old and was on site this week in Jackson, Miss.

Those changes are starting to take hold and the results are showing in his game.

“It's just confidence,” said Gligic. “I've been going through a couple little things in my swing, a couple swing changes I've been working on with my coaches, and yeah, it's nice, everything is kind of starting to click and we're starting to find some nice scores again.”

Gligic wasn’t the only Canadian high up on the leaderboard in Round One. Both Corey Conners and Roger Sloan posted five-under 67s and were tied for 11th, Nick Taylor, who won this event in 2014, was three-under 69 while David Hearn was one behind that.​