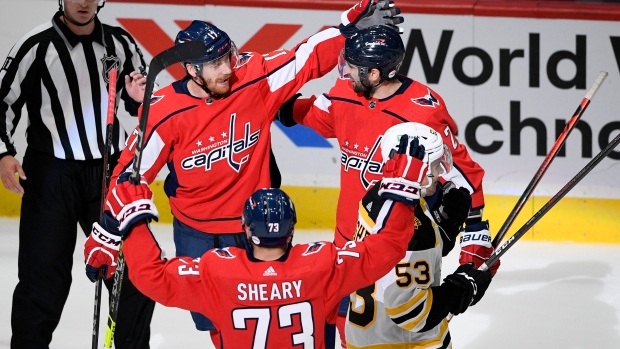 WASHINGTON (AP) — Michael Raffl scored from a tight angle with 1.8 seconds remaining and the Washington Capitals beat the short-handed Boston Bruins 2-1 on Tuesday night in the teams' regular season finale.

Carl Hagelin also scored and Vitek Vanecek stopped 25 shots for Washington in a game between teams who will meet in the first round of the playoffs. The Capitals also welcomed right wing Alex Ovechkin and center Nicklas Backstrom back from lower-body injuries.

Curtis Lazar scored for the Bruins, who played largely a reserve squad. That included nine players that entered Tuesday with fewer than 10 games this year and only six with 40 or more. Jeremy Swayman made 30 saves for the Bruins.

Lazar opened the scoring midway through the second period when he snuck in front of the crease behind defender Tom Wilson and guided in Jarred Tinordi's cross-ice pass.

Hagelin tied it with 3:45 left to go in the period, putting in a loose puck from in close after Swayman stopped Zdeno Chara's initial shot.

It remained that way until Raffl collected a loose puck inside the final seconds in the Bruins' end. From just feet from the goal line left of the goal, he lifted a shot above Swayman's right shoulder and into the roof of the net.

The Capitals fourth line of Hagelin, Nic Dowd and Garnet Hathaway all played their 56th game on Thursday, representing three of Washington's four players to appear in every game this season. The unit combined for 23 goals and 48 points.

The Bruins and Capitals begin their playoff series on Saturday night in Washington.