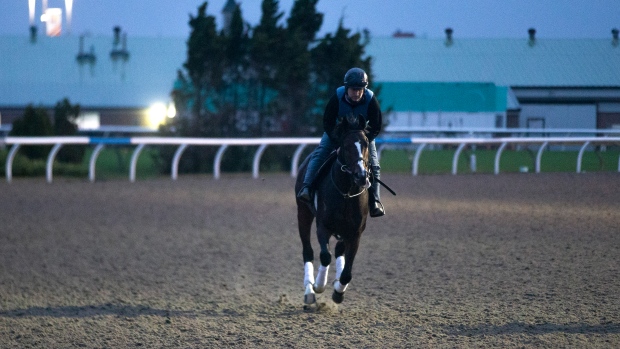 A lot of the talk leading up to this Saturday’s Breeders’ Stakes has been on Mighty Heart and it looks like a lot of the money will be, too.

Mighty Heart sits at 1-1 in the morning odds released Wednesday to lead the 12-horse field for the $400,000 Breeders’ Stakes, according to Woodbine Entertainment. Belichick, who finished second in the Queen’s Plate, is the second choice so far at 7-2, while Clayton sits third at 6-1.

Three other horses (Told It All, English Conqueror and Olliemyboy) tie for fourth at 12-1.

Trained by three-time Queen’s Plate winner Josie Carroll, Mighty Heart placed first at the $1 million Queen’s Plate on Sept. 12 despite coming in as a 13-1 longshot. The one-eyed Bay Colt won again just over two weeks later in the $400,000 Princess of Wales Stakes, this time as a 6-5 favourite.

A win Saturday would secure the OLG Canadian Triple Crown for a thoroughbred for the first time in 17 years. Only seven horses have taken home all three jewels since the series was established in 1959.

Mighty Heart will be ridden once again by jockey Daisuke Fukumoto, who was between the irons for both the Queen’s Plate and Princess of Wales Stakes last month.

As good as things look for Saturday, the weather may be a factor. It’s been a wet week in Toronto so far with rain in the forecast again on Thursday. The turf at Woodbine Racetrack could still be damp come post time.

“I can’t tell you how he’s going to handle a yielding turf,” Carroll told Woodbine. “In North America, we very seldom get the chance to run on very soft turf. I believe he’ll handle the grass. He’s run once on the grass, and we had him up on the E.P. course the other day, and he just skipped across it. Pedigree-wise, we have every reason to think he’ll handle it [the 1 ½-mile distance], but until a horse does that, you really don’t know.”

The longest shot to win the Breeders’ was Miami Deco in 2010, who paid out at an absurd $132.20 for a $2-win bet. The Breeders’ is currently scheduled as the 10th race at Woodbine on Saturday with an approximate post time of 5:43 p.m. Watch coverage beginning LIVE on TSN4/5, TSN.ca, the TSN App and TSN Direct at 5 p.m.

Here are the full odds for the 2020 Breeders’ Stakes: