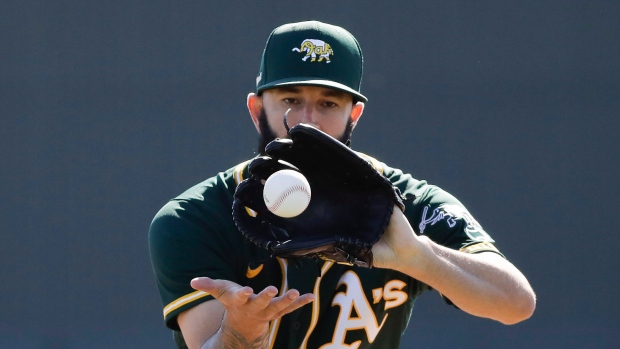 MESA, Ariz. — Mike Fiers is scheduled to start a split-squad game for Oakland on Sunday in his first game action since revealing the Houston Astros' cheating scheme.

It had not been determined Wednesday whether Fiers' spring training debut would come in the home game versus San Francisco or against Arizona in Scottsdale.

Fiers went 15-4 last season, including the second no-hitter of his career, as the A's earned an AL wild-card spot.

In a story published by The Athletic in November, Fiers said the Astros had stolen signs using a camera in centre field during their run to the 2017 World Series championship. Fiers played on that team.

The ensuing scandal resulted in three managers losing their jobs, a fine and other penalties, and has become the talk of Major League Baseball. Many players have harshly spoken about the Astros, saying they should be stripped of their title.

There has been debate among fans and others whether Fiers did the right thing in his role as a whistleblower. Commissioner Rob Manfred said there was no doubt Fiers helped the sport.

“We will take every possible step to protect Mike Fiers wherever he's playing, whether it's in Houston or somewhere else,” Manfred said. “Mike did the industry a service."

Fiers has declined to speak in detail about the scheme itself or his decision to go public.

“I'm not asking for extra security. I'm here to play baseball and I can defend myself, if anything,” he was quoted at saying by The Athletic on Wednesday. “It's part of the game. If they decide to throw at me, then they throw at me. There's nothing much you can do about it.”