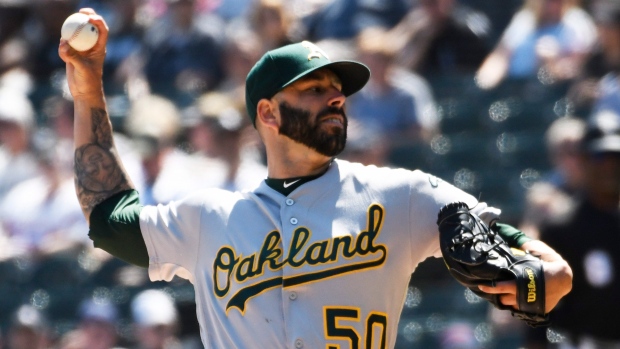 MESA, Ariz. — In the ocean off the Florida coast, Mike Fiers found a way to get his mind off everything this winter for a couple of hours at a time and prepare for another baseball season.

Far away from the Astros scandal. No whistleblower chatter. Just tough swims in the surf and workouts with his buddies on Pompano Beach.

It's an off-season the Oakland pitcher is counting on to carry him from the momentum he established during a career year in 2019 and another playoff season, when he pitched his second career no-hitter and went on to win 15 games.

Fiers made it clear he is moving forward after he told The Athletic in November that his former Houston team had stolen signs using a video camera in centre field during the Astros' 2017 run to the World Series title.

“Right now I want to focus on this team and not the past,” said Fiers, who has declined to speak in detail about the scheme or his decision to go public.

“I'm glad we're at this point right now, and obviously Mike had a lot to do with that,” A's manager Bob Melvin said Wednesday as pitchers and catchers held their first spring workout. “The game's better for it from this point going forward. I think it's all about moving past right now and getting through a lot of the issues that you saw. It's supposed to be an equal playing field, and it wasn't.”

The A's were one of the teams to alert Major League Baseball about the Astros, Melvin said. Oakland won 97 games each of the past two seasons to finish second to Houston in the AL West before losing the wild card game both years.

Still, he watched as left-hander Sean Manaea took the ball and the loss in the AL wild card game to Tampa Bay. Fiers wanted the start that night but understood Melvin made a tough choice.

“I want that opportunity. Manaea’s definitely deserving of that moment as well,” Fiers said. “We were supportive of him but personally for me of course I want the ball. You can only give it to one person.”

Despite the disappointment, Fiers got right back to work, reuniting with longtime friend Mike Dobre a couple of times a week.

Back in their days as college players, they would get up at 5 a.m. to run on the beach. Dobre motivated Fiers, and it was fun for them to reconvene their intense workout regimens together this winter after Dobre spent the recent years as an Army Ranger.

“He’s pretty crazy. He used to get me up early in the morning,” Fiers said. “We used to do our beach runs at 5 a.m. It goes a lot to mental toughness, things of that sort. That’s when we were in college. It changes your mind on a lot of things. A lot of people like to stay in their bed, get your sleep and stay warm, but just getting up and training I think it sets you apart and sets that mental stage.”

Dobre is now working for the Broward County Sheriff’s office, so this winter they typically did their workouts in the afternoon.

They had an eager young pupil, too: A’s rookie left-hander Jesus Luzardo wanted a glimpse at his veteran teammate's routine and joined them.

“I had a great time training Fiers again. I’ve always said, ‘this guy outworks everyone,’” Dobre said. “From mile swims, to unknown distance beach runs, and weight room. I also incorporate a lot of mental toughness into our training. We’ve trained for so many years but I had to leave for the Army. Now I’m back and it was great to have a full off-season together. It was a pleasure to have Jesus out there."

Luzardo, who returned from strains to his rotator cuff and lat muscle to make six appearances with a 1.50 ERA and a pair of saves over 12 innings, will be a key addition to the Oakland rotation.

“We were dead at the end of the workouts. To see a veteran go that hard in the off-season and prepare that intense for a season it kind of motivates you to see what you need to last a full season, to have success and have a long career,” Luzardo said.

“Jesus is so mature for his age,” Melvin said of the 22-year-old pitcher, who won't be on an innings limit. “He’s got a great head on his shoulders and we saw that from Day 1 with him. It was just about getting him healthy."

Fiers is grateful for Dobre's example all these years.

“His training, his work ethic, the way he goes about everything,” Fiers said, "it pushed me to another level.”