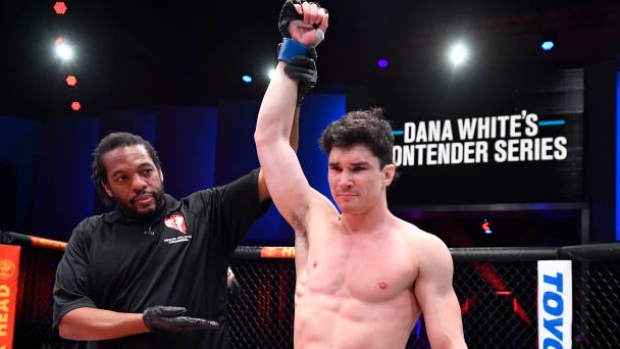 The world’s toughest job interview lasted just 39 seconds for Canadian Mike Malott this past Tuesday as he made short work of Shimon Smotritsky on Dana White’s Contender Series, earning the second-fastest submission victory in the history of the show and a new UFC contract for his efforts.

Malott’s victory came in the main event of the Week 6 card, so he didn’t have to wait too long to find out if he had won his way into the MMA’s No. 1 promotion, though he still wasn’t sure he was going to get the spot until UFC president Dana White made the announcement.

“I obviously was happy with the win, but I wasn’t sure if they were looking for something like a barn-burner fight, so there was a little part of me that’s like, ‘I hope they’re satisfied with that.’” Malott told TSN. “I mean, I put the guy out pretty quickly, so I was trying to stay positive. When they finally called my name, I was pretty excited.”

The 29-year-old became the third Canadian to earn a contract during this season of Contender Series, joining Chad Anheliger and Jasmine Jasudavicius, who both got the call on earlier episodes.

For Malott, it almost didn’t happen.

After a victorious return to fighting following a neck injury, Malott had a few fights fall through in 2017 and started to lose interest in fighting.

When one of the head coaches at Team Alpha Male left, UFC Hall of Famer Urijah Faber offered the Canadian the position of striking coach at the gym, which he accepted.

He feels the time spent in the position made him a more well-rounded fighter and, at least at the beginning, he had no plans of going back to competing.

“I fully intended on just coaching,” said Malott. “Even my first few times coaching guys in the UFC, I was like, man I’m not jealous of any of them, I don’t want to be the one in the cage, I don’t feel the need to do it. As time went on, the hunger started coming back, the fire started coming back. Obviously I’m there to coach, I’m focused on coaching while I’m coaching, but there’s part of me that’s like, ‘damn I wish I could be the guy that’s in there.’ So, I started training more intensely for fighting, I started sparring again, I started doing all the things that fighters need to do and we started looking for fights.”

He found a fight in CFFC and on only two-weeks notice and moving up a weight class, dispatched of then undefeated Solomon Renfro via rear-naked choke in 1:42 after four years of inactivity, setting the stage for his appearance on the Contender Series.

Smotritsky was also undefeated before he stepped in the cage with Malott, who himself has only suffered one loss in his professional MMA career at the hands of fellow Canadian UFC fighter Hakeem Dawodu in 2014.

The Burlington, Ont., fighter believes the tough guys he’s faced along the way are exactly what helped him prepare for his moment on the Contender Series.

“A lot of guys get to 7, 8, 9-0 and have fought nine guys that they’re better than, they’re not 9-0 because they’re unbeatable, they’re 9-0 because they are OK,” said Malott. “The confidence that comes from having been in seven real fights for me and having beaten multiple high-level guys. I’ve fought a lot of tough guys, so having that confidence of: ‘this could be the toughest guy I’ve ever fought, it might not be the toughest guy I’ve ever fought.’”

Malott’s brother, Jeff, is a member of the Winnipeg Jets organization and had a goal and an assist in last Sunday’s NHL preseason game against the Vancouver Canucks.

The question is, if Jeff threw down the mitts, could he fight like his UFC-signed brother?

“Oh yeah, Jeff can scrap,” said Malott. “He never had a mixed martial arts career or anything, but if he’s gotta have a little tilt, I’m sure he’s going to hold his own and do me proud.”