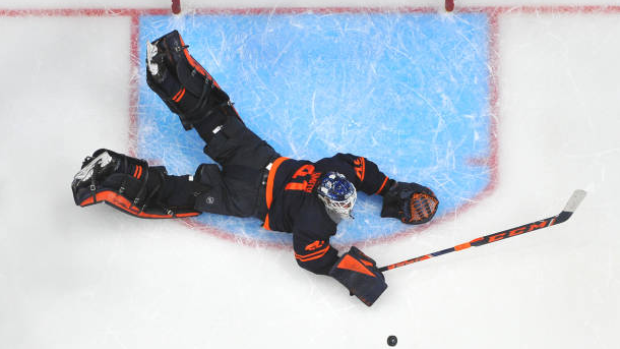 Mike Smith's attempt to clear the puck up the middle proved to be a costly mistake as the Edmonton Oilers lost Game 1 to the Los Angeles Kings 4-3 on Monday night.

With the game tied with just over five minutes left in the third period, Smith’s pass from behind the redline was intercepted by Alex Iafallo. The Oilers goaltender made a diving stop to deny Iafallo but as play continued, Smith was beaten seconds later by a point shot from Sean Durzi, which deflected in off Phillip Danault.

"I was just trying to make something happen; obviously trying to do too much there," Smith said. "In a tight game like that you can't afford to make mistakes like that. It ended up costing us the game. Obviously disappointed, but it's one game and we move on."

The Oilers found themselves in a 2-0 hole in the first period before Connor McDavid opened their postseason scoring with less than a minute remaining in the opening frame. McDavid pointed to the team's slow start as an area of improvement when the series continues in Game 2.

"There's lots of emotion with fans back in the building and I thought we just didn't handle it all that well; they got the jump on us," McDavid said. "I thought we did a great job of getting ourselves back in the game and giving ourselves a chance. Ultimately, it's one bounce. We didn't have a great start. We gave up a few chances and found ourselves down by two. It wasn't a good enough start in our home building. It's something to work on."

"I didn't love the way we started the game, obviously, we gave up a chance off a neutral zone faceoff we took an early penalty, those type of things that allowed them to feel good at the start of the game," head coach Jay Woodcroft added. "I thought we worked our way into things and found a way to compete in the end it came down to an error in the third period and they capitalized on it."

The Oilers, who were swept in the first round last season by the Winnipeg Jets, have just one victory over the past two postseasons but will look to add another victory to that column on home ice Wednesday before heading to Los Angeles for Game 3 on Friday.