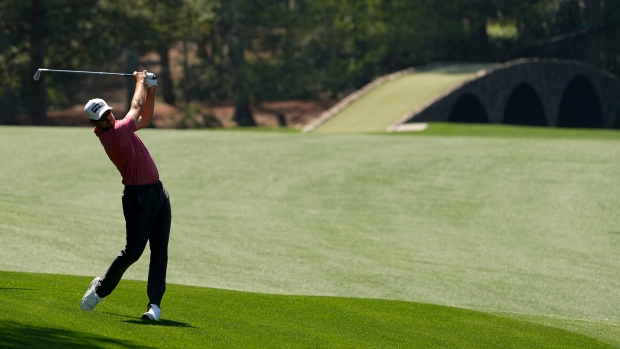 AUGUSTA, GA. – Mike Weir knows what most of Canada suspects: Mac Hughes and Corey Conners can win the Masters.

Weir, the 2003 winner of the Green Jacket, offered that information to them directly during a practice round at Augusta National ahead of the start of the year’s first men’s major. It was the wise, experienced 50-year-old kicking the two younger Canadians out of the Masters nest.

“I told them out there, I said, ‘You guys are ready.’” Weir stated. “You've got the experience now. You've been out on tour long enough. You've played enough big tournaments. You've got to have that self-belief.”

That’s great advice coming from a guy who has always had an overload of self-belief and from the person who in many ways is responsible for where Hughes and Conners are.

It was Weir’s Masters victory, not to mention his other seven PGA Tour wins, that inspired Hughes and Conners to embark on golf careers. Like so many Canadians, they know where they were and what they were feeling when Weir tapped in the winning putt in a playoff against Len Mattice to become the first Canadian man to win a major.

Now the two are set to tee it up with legitimate shots at a victory of their own.

“I've been playing well lately,” stated Conners, who comes in ranked 43rd in the world. “I've got a lot of confidence in my game, expecting to continue the solid play. Hopefully, keep hitting it well and make things as easy as possible for myself. Stress-free golf would be nice.”

In the last edition of the Masters held in November due to the COVID-19 pandemic, Conners posted the lowest score by a Canadian in the tournament’s history with a second-round 65. That helped him to a 10th-place finish, which earned him a return visit.

More recently, he’s finished inside the top 15 in three of his last five starts including a third at the Arnold Palmer Invitational.

Conners has always thrived on great ball-striking, ranking ninth in driving accuracy and 11th in greens in regulation. His smooth, silky swing has been capturing lots of attention on the PGA Tour. What has usually been the deciding factor in his final score has been his putting.

Late last year, the Listowel, Ont., product switched his grip, going to a left-hand-low version. Along with plenty of hard work, he’s improved more than a hundred spots in the Strokes Gained: Putting category.

Another alteration came in the form of new wedges that allow him to put more spin on the ball for delicate shots around the green. It’s just an expansion of his arsenal that he’ll need around a hard and fast Augusta National.

His overall improvement has boosted his confidence and he will step to the first tee on Thursday feeling good about his prospects.

“I expect to shoot some under-par rounds and hopefully get in the mix come Sunday,” Conners stated.

Hughes, 51st in the world, continues to marvel at his fellow Kent State University alum, something he’s done for a long time.

“He's been driving it great his whole life,” said Hughes, “so he'll probably keep doing that this week as well. Been hitting his irons well his whole life, will keep doing that, and rolling it nicely. He’s the same Corey that I met when I was 13 over at Listowel Golf Club trying to beat him at the Future Links.”

Neither could remember who won the majority of those battles in their teenage years, but the two have been playing together and against each other for most of their lives. More recently, they’ve been partners in a regular Tuesday match against their B.C counterparts on the PGA Tour, Adam Hadwin and Nick Taylor. The Ontario duo have enjoyed a healthy winning margin this season.

“No one's short game I've played with is better than Mac,” Conners stated. “His creativity, his touch around the greens, his knack for making key putts, long putts. Fortunately, he's my partner a lot of the time in our practice rounds, and I've reaped the benefits of him making a number of really clutch putts coming down the stretch. So that part of his game separates him from a lot of guys out here. He's striking the ball really well, as well.”

Hughes comes into the Masters after making it into the round of 16 at the WGC-Dell Technologies Match Play where he knocked off Webb Simpson and Paul Casey, and tied Talor Gooch. He eventually lost to Sergio Garcia but his strong play boosted his confidence for his second appearance at the Masters.

“I feel like my game's in a good place,” said Hughes, a two-time Canadian Amateur winner, “and I have played in enough majors now to have the experience to feel comfortable. I think it's about trying to get yourself in position for Sunday.”

And don’t think for a minute that Weir has completely shut the door on adding another Green Jacket to his closet. He knows it’s a long shot but that never-quit attitude is what got him his first win in this tournament.

“I mean, you never know,” he said with a wry smile. “I like to keep my mind open. If I play well and I'm in a good position going into the weekend and the conditions favour me, you never know what I could do on the weekend.”

If that doesn’t work out, he’d be more than happy to watch one of his fellow countrymen get the win.

Conners will tee off Thursday at 9:12 along with Charl Schwartzl and Si Woo Kim, while Hughes plays at 11:30 with Carlos Ortiz and Bernd Wiesberger. Weir is at 11:42 with C.T. Pan and Robert McIntyre.