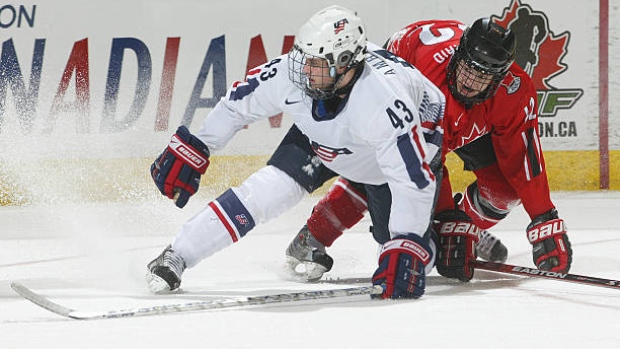 Amburgey was 29 when he died of COVID-19 in August 2020. His widow, Aimee Eigenberger, said that he had suffered from anxiety, depression and other symptoms of post-concussion syndrome for several years before his death.

“He got a temper and wasn't sleeping,” Eigenberger said in a phone interview with TSN. “He'd be up for days on end and had anxiety. Tyler knew something was going on. He told me, ‘I can feel something wrong in my brain.’”

Eigenberger said it almost seemed like Amburgey, who played seven professional seasons in three leagues, had become a different person.

“He had numerous concussions playing hockey,” she said. “His behaviour changed. His anger was like a light switch. He’d fly off the handle over nothing, like if I asked him to mow the lawn. He’d go into our bedroom, sit on the bed, and just stare at the wall. And he was on so many medications. He was on meds to treat side effects from other meds. He was on OxyContin and Xanax and muscle relaxers. One neurologist had him on three or four different brain meds. There were days he would just cry if he forgot something or if he was late for something. And he was not a crier.”

Eigenberger said Amburgey told her he wanted his brain to be donated to science. In late July, doctors at Boston University’s CTE Center told her that Amburgey had CTE. She said that she does not know the extent of the CTE because she still has not received a written report from scientists.

Amburgey’s case highlights that while media accounts of athletes with CTE centre on those who make it to the major leagues in their sports, there are many minor-league pro athletes who are also at risk of developing long-term neurological problems because of concussions, said Chris Nowinski, chief executive of the Boston-based Concussion Legacy Foundation, which works with Boston University on CTE research.

Amburgey played his final professional season in 2015-16 with the Pensacola Ice Flyers before returning to Texas.

“Tyler tried to work at an office job. It wasn’t a fit for him,” Eigenberger said.

Amburgey was coaching minor hockey in Dallas when he became ill with COVID-19.

Eigenberger said she is sharing her family’s story to raise awareness of the issue of repeated brain trauma.

“My advice to other hockey wives is to watch for signs and symptoms and do something,” she said. “Take them seriously. Once it goes too far, you don't know how dark it is.”

Four former junior hockey players, who all died of suicide before the age of 30, have also tested positive for the disease.

While the NFL admitted in 2016 that a link exists between repeated brain trauma and long-term neurological disorders, the NHL has rejected the connection.

NHL commissioner Gary Bettman told a Canadian parliamentary committee studying concussions in sports in 2019 that no such association has been established.

“It goes without saying that trauma to the brain can be harmful and we recognize, as the [U.S.] Centers for Disease Control and Prevention (CDC) has cited, that the research to date suggests that CTE is caused by repeated trauma to the brain, including concussions and sub-concussive events,” the union wrote.