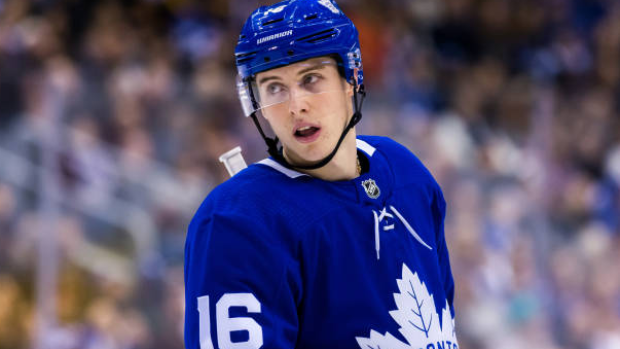 TSN Toronto reporter Kristen Shilton checks in daily with news and notes on the Maple Leafs. The team practised at Ford Performance Centre on Tuesday.

Mitch Marner knew something was off the second after he tripped over Carsen Twarynski’s stick to start the second period of Saturday’s game against Philadelphia.

“When I fell, I felt a snap in my ankle. I was kind of expecting when I looked back for my ankle to kind of be facing the wrong direction,” Marner said after the Maple Leafs’ practice on Tuesday. “When I noticed that it wasn’t, I didn’t really know what the feeling was. I didn’t know what the result could have been, so I kind of had my mind open to anything.”

Marner suffered a high-ankle sprain in the fall, which will sideline him a minimum of four weeks. Marner, who has 18 points (four goals, 14 assists) in 18 games this season, spoke to the media for the first time about the incident on Tuesday, while sporting a walking boot on his right leg.

The winger revealed that he was still optimistic nothing was seriously wrong after he had taken the fall and pushed himself across the ice to Toronto’s bench. That’s why he went back out for another shift with the Leafs’ second power-play unit before ultimately being sent to the dressing room.

“It felt good on the bench, and then I went out for that power play and tried to keep that puck in [the zone], I kind of fell again on it and it just didn’t feel right,” he said. “I went into the room, got it taped up and did a bunch of mobility things I felt pretty good with.”

Marner came back onto the ice during a TV timeout to test the ankle, but the Leafs’ medical staff wasn’t confident he should continue to play.

“I was trying it, and it felt pretty good, but a couple turns just felt awkward and that’s what trainers are there for,” he said. “I think they realized that I was in an uncomfortable situation. They called it, that I should probably just take the rest of the night off and see what happens tomorrow.”

An MRI on Sunday revealed the sprain, a disappointing diagnosis for Marner but one he’s determined to take positives from.

“Looking back at the video, seeing the photos, it could have been a lot worse than what actually happened,” Marner said. “You always have to look at the bright side and now it’s something where I can get in that gym, get stronger and try to make my shot better when I get back.”

Marner said he hopes to have the walking boot off by Friday so he can get the leg moving again and improve his mobility. In the meantime, Toronto is preparing to soldier on without a major contributor. Marner is averaging the second-most minutes among Toronto’s forwards this season (19:40), with significant time on both the power play (3:14) and penalty kill (2:53).

“Other people get an opportunity,” said head coach Mike Babcock. “We got to figure it out as a coaching staff and [so do they] as players, and figure out who plays with whom and to help the group be the best they can be. We’ll take a look and try to get the group to be set up the best way it can to have success.”

“It’s part of the game,” added Tavares. “It’s unfortunate and obviously we want [Mitch] back as soon as possible. The circumstances are what they are, and that’s why you need depth and we certainly have that. It’s a great opportunity for many guys to take advantage of this and certainly as a team to come together and play well and get the results we need.”

Just as the Leafs are losing one key player to injury, they’re getting another one back in Hyman.

The winger is finally ready to make his season debut against New York on Wednesday after seven months spent rehabbing from a torn ACL suffered in Toronto’s first-round Stanley Cup playoff series against Boston last April.

Hyman had been a regular participant in practice for weeks before receiving medical clearance to return, but was determined not to rush for a too-early comeback.

“I was just making sure I was ready,” he said. “You never know with an injury like this because it’s a long process. So just to make sure that I was over ready almost, where you’re eager and hungry to go and get your clearance and are managing the soreness and whatnot that comes with an injury like that.”

Hyman said he’d like to be playing with both a healthy Marner and Tavares, who only just returned from a finger injury himself last week, but joked now he’ll definitely “be back up to game speed” by the time Marner recuperates.

After such a long layoff, Hyman understands finding his form won’t happen overnight.

“I’ve learned to just do what I do best and not worry about other things and just play my game, play simple,” he said. “Hopefully I’ll just pick up where I left off on that front and I have a good mindset about what I need to do out there. I’m not going to go trying to do too much or anything like that, just going to play my game like I’ve played since I got here.”

Babcock isn’t saddling Hyman with any expectations going into his debut, knowing there are questions that can’t be answered until he’s back in the thick of game action.

“He just works right, works like a dog,” Babcock said. “Now, can he get on the forecheck and get us the puck back like he always does? I don't know the answer for that for sure. How will he be on that right-hand faceoff circle on the penalty kill? I don't know that either. So I’m going to watch and we’re going to figure it out.”

Kasimir Kaskisuo has been longing for a shot at the Leafs’ backup goalie job, and it appears his time has finally come.

The Leafs’ recalled Kaskisuo from the Marlies’ on Tuesday morning, one day after waiving backup Michael Hutchinson.

The decision to move on from Hutchinson came after the journeyman backstopped Toronto in a 5-4 loss to the Chicago Blackhawks on Sunday, putting his record at 0-4-1 to start the season with an .879 save percentage and a 4.44 goals-against average.

Toronto had seen enough after that, and opted to give Kaskisuo a look behind starter Frederik Andersen. But the Leafs also know they didn’t do nearly enough to help Hutchinson, who cleared waivers on Wednesday, be successful.

“Absolutely [we didn’t],” said Tavares. “I think we have to own that and feel that. We didn’t play very well and didn’t give him much of an opportunity to get some good results and feel better about himself. He made many key saves, gave us a chance to win many of the games that he played in and we just didn’t reward him. We should feel that for sure.”

All of Hutchinson’s starts came on the second night of back-to-backs for the Leafs, a tough assignment that ultimately didn’t pan out for him or the team.

“We weren’t doing a very good job,” said Babcock. “Hutch is a good man and a good person and tried hard and we didn’t play good enough.”

Babcock said Kaskisuo will play the second half of those back-to-backs for the time being, the next one coming Saturday in Pittsburgh. That would mark Kaskisuo’s NHL debut, something he’s waited for since signing with the Leafs as a college free agent in 2016 and spending the last four seasons in the AHL.

“It’s pretty crazy,” Kaskisuo said. “[Monday] was a pretty happy day for myself and my family. It was crazy but I’m really, really excited.”

Kaskisuo said he hasn’t spoken much with Babcock about expectations, but feels his AHL tenure and the difficulties he’s endured there have set him up well for what's next.

“All those little bumps on the road prepare you and make you mentally stronger, so I feel like that’s one of my strengths so far,” he said. “I’ve been through a lot and been thrown everywhere, so just try to harness that and use that to my advantage.”

In the wake of Monday’s news that Don Cherry had been fired from Hockey Night in Canada after calling immigrants “you people” during a rant on the air Saturday night, some Leafs commented on the way Cherry’s career had come to an abrupt end.

“I think it’s disappointing on many fronts,” Tavares said. “Certainly the comments, and the way his tenure ended. He’s meant a lot to the game and provided a lot. It’s obviously disappointing what happened and the result. I think everyone would wish something like this never happened and didn’t come to this set of circumstances.”

“Growing up here, he always meant a lot to hockey and I think everyone grew up watching him in Toronto and Canada in general,” Marner said. “But hockey is meant to bring people together. The comments were a little far.”

“You’ve got to be mindful of how great the game is and what the game is all about and in bringing people together,” Babcock added. “There's no question about that. It's got to be tough for him and his family. In saying all that, there are certain things that are just right.”​