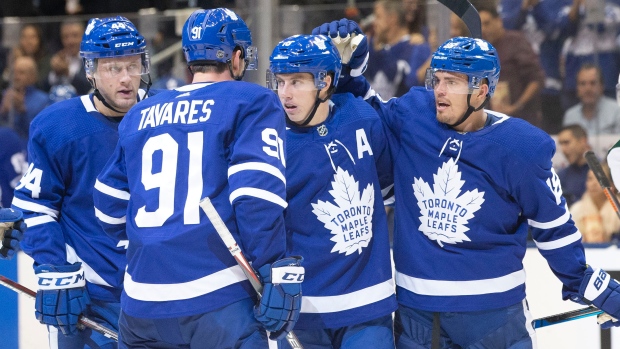 TORONTO — The Maple Leafs have made a habit of falling behind early this season.

That didn't matter much against a slow, tired opponent Tuesday.

Mitch Marner scored once and added two assists, Morgan Rielly set up all four goals in a second-period barrage to tie a team record, and Toronto overcame another so-so start to down the Minnesota Wild 4-2.

After giving up the opening goal for the sixth time in seven games — and the fifth in five home dates — Toronto buried four straight in just over 11 minutes to quickly put things out of reach.

"We weren't as good as we'd like to be in the first," Leafs head coach Mike Babcock said. "We've got to do a better job."

They certainly got the job done from there.

Andreas Johnsson, with a goal and an assist, John Tavares and Auston Matthews also scored for Toronto (4-2-1), while Frederik Andersen made 27 saves.

Rielly's four assists in the second tied a franchise mark set by Rick Vaive on March 12, 1984, for the most by a Leafs player in a regular-season period.

"We just talked about being patient and not trying to force too much," Rielly said. "I thought we played a good first and obviously didn't get the results we wanted."

Luke Kunin and Gerald Mayhew replied for Minnesota (1-5-0). Devan Dubnyk stopped 30 shots for the Wild, who beat the Senators 2-0 in Ottawa on Monday for their first win of 2019-20.

"It was definitely not the second period we wanted," Dubnyk said. "You want to try and find a way out of that better than we did."

Minnesota head coach Bruce Boudreau lamented his veteran roster's lack of foot speed, which was evident all night against the high-powered Leafs.

"I wish I had a magic potion to make everybody faster," Boudreau said. "But I don't. That's why you've got to grind it out."

The Wild weren't able to do that after their encouraging first.

Tavares got things going at 1:58 of the second when he wired a slapshot off the post and in on Dubnyk with Marner in front for his second of the season.

The goal came after Babcock moved Trevor Moore up to play with Tavares and Marner, while Kasperi Kapanen slid down the lineup to join Alexander Kerfoot and Ilya Mikheyev.

"I've just been watching it ... no one seemed to be going," Babcock said of the switch. "Tried it and it seemed to be OK, so we just stayed with it."

Marner then gave the Leafs, who visit the Washington Capitals on Wednesday, their first lead on a power play at 7:17 when he fired a shot through the pads that Dubnyk could only get a piece of for his third.

The Wild, who will play 13 of their first 18 games on the road, appeared to have a good chance to get back even, but Ryan Hartman pulled down Leafs defenceman Jake Muzzin with Ryan Donato off to the races on a breakaway.

Hartman, who had taken a big hit moments earlier, accused Muzzin of diving.

"It was embarrassing," said the winger. "He knows what happened."

Boudreau said Hartman has to keep his cool in that situation.

"He can blame Muzzin all night," he said. "There was no need for it."

Toronto made the visitors pay just 10 seconds later when Johnsson batted a puck out of the air at 8:29 as the Leafs connected on two of their three man-advantage opportunities after coming in just 5-for-22.

"We wanted to get our power play going," Marner said. "That was huge."

The home side went up 4-1 at 13:05 when Matthews scored his seventh on a pretty give-and-go with Marner after Dubnyk, who entered 0-4-0 with a 4.56 goals-against average and .862 save percentage, made the initial save.

Andersen stopped Marcus Foligno on a breakaway in the final minute of the second at the other end, and had to be sharp five minutes into the third on a 3-on-1 rush when he robbed Zach Parise.

Johnsson nearly got his second of the evening later in the period, but his blast from the hash marks rattled the crossbar.

Mayhew, who was making his NHL debut, scored late for the Wild, but Toronto improved to 2-2-1 at home and picked up its first victory at Scotiabank Arena since beating Ottawa in the season opener.

Having played just once at home, the Wild went up 1-0 at 5:29 when Kunin fired his second through a screen on Andersen.

The Leafs snapped a 0-2-1 stretch with Saturday's 5-2 road victory in Detroit over the Red Wings, and had a couple of opportunities to get even, but Dubnyk was there before the floodgates eventually opened after the intermission.

"It wasn't a terrible first period, but we still felt we had a lot more," Tavares said. "It seemed like when we got that first one (and) drew some penalties, we were able to open the game up and put some pressure on."

Notes: Mayhew, a 26-year-old Ferris State University product and a veteran of 164 American Hockey League games, did a solo lap before warmups. ... Minnesota visits Montreal on Thursday before hosting the Canadiens on Sunday.