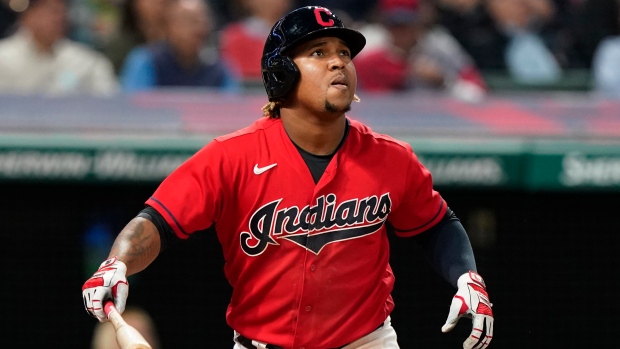 TORONTO — At this time of year, the focus for outsiders is on the free-agent market.

But before front offices truly start to hone in and gauge where those prices will go over the next few weeks, much of their internal attention is spent on the trade market, trying to figure out what possibilities exist on that front first.

Investigating the chances of shifting around redundant assets for already cost-controlled pieces to avoid paying the free-agent market premiums is where things usually start.

The Toronto Blue Jays could be dabbling in this area this winter.

From major-league trade chips such as Lourdes Gurriel Jr., Alejandro Kirk, Randal Grichuk, Danny Jansen and Ross Stripling, to prospect names like Jordan Groshans, Kevin Smith, Otto Lopez, Leo Jimenez and Sem Robberse, there’s no shortage of assets that could pique another team’s interest in trade talks, depending on the magnitude of the deal.

For the Jays, the shift towards using higher-end prospects as trade chips started at the trade deadline, but dealing Austin Martin and Simeon Woods Richardson in exchange for a season and a half of José Berríos won’t be the end.

This winter, however, it would not be surprising to see the Jays finally start to shift around some of their major-league pieces, something both GM Ross Atkins and president/CEO Mark Shapiro hinted at in their year-end availabilities last month.

“I'm not a believer that you have to sign anyone back — I’m a believer that you have to get better,” Shapiro said when asked about their top two free agents, Robbie Ray and Marcus Semien. “As I sit down with Ross and sit in on our meetings or preparation, there are multiple ways for that to happen. We'll have the resources to do it, both in young talent that we could trade and in payroll.”

Atkins doubled down on that assessment.

“Sometimes it may take an addition by subtraction,” Atkins said. “We haven't done much of that. We haven't subtracted from our major league teams. We have to be open to all avenues.”

After looking at the free-agent options at each position this week, we’ll finish things off with a peek at some impact players the Jays could attempt to trade for this winter.

THE ALL-IN TARGET: 3B Jose Ramirez

The fit is real here, and the interest in the perennial MVP candidate is, too.

With two years left on his deal at an absolute bargain — $12 million for 2022 and $14 million for 2023 — the time for Cleveland to maximize Ramirez as an asset is now, even if they don’t technically need to deal him.

The owner of a .286/.364/.531 slash line and a 135 wRC+ over his last six seasons, the 29-year-old is a prime-age player who would replace Semien’s production, at the same time evening out the lineup handedness as a switch-hitter.

He will cost the Jays multiple high-end assets, likely prospects and roster players, but it’s hard to argue against an impact move like this.

Owed just $30 million over the next three seasons, the Arizona Diamondbacks will have every team calling if they truly put Marte on the market.

In addition to his ability to hit from both sides of the dish, Marte also brings some positional flexibility with his ability to play second base and the outfield.

Like Ramirez, the cost is going to be huge, but Marte is an impact player in his prime.

THE LIKELY TARGET: 3B Jose Ramirez

As mentioned, the Jays’ interest in Ramirez is real and the relationship Atkins has with Cleveland decision-makers doesn’t hurt.

Over the past two winters the two groups have talked shop extensively about Francisco Lindor and Corey Kluber, so there’s no secret which assets Cleveland likes.

Given the timing and the fit of Ramirez, this could be the off-season they finally get something done.

THE BUY-LOW TARGET: 3B Matt Chapman

Things worked out pretty well for the Jays the last time they called the Athletics about a third baseman in his late 20s, so they could attempt to do it again seven years after the Josh Donaldson trade.

One of the best defensive players in the game at the hot corner, Chapman’s strikeouts have jumped to over 30 per cent the past two seasons, leaving him with a flawed, low-OBP profile.

But when you combine his age with a 2019 campaign that saw him hit 36 home runs with a 21.9 per cent strikeout rate, and there could be a bounce-back in the cards with the right adjustments.

The A’s could be ready for another one of their periodic fire sales this winter. Chapman is controlled for two more seasons.

THE OFF-THE-RADAR TARGET: OF Jesse Winker

A left-handed hitter with a career on-base percentage of .385, acquiring Winker to play left field and moving Gurriel Jr. for pitching would be a great way to even out the lineup handedness and add a prime-age middle of the order bat.

Like the A’s, the Cincinnati Reds have a number of intriguing assets to peddle if they’re sellers this winter and Winker, who’s controlled through 2023, would be right up there.

If the Reds are tearing it down, the calls on Castillo and fellow righty Sonny Gray will be fast and furious.

Both were rumoured to be available last winter, but the prices were sky high. That won’t change much this winter as both pitchers are controlled for two more seasons, allowing the Reds to dig in hard for two pitchers with top-of-the-rotation stuff when they’re going well.

Due a raise this year in his second-to-last trip through arbitration, Montas is one of three Oakland starters who could conceivably be available.

Lefty Sean Manaea and right-hander Chris Bassitt are the others, but Montas’ body type, at 6-foot-2 and 255 pounds, and career-high 187 innings in 2021 are traits that the Jays have been into in the past.

His split-finger fastball is a devastating offering, limiting hitters to just a .126 average and featured a 51.4 per cent whiff rate in 2021.

The only reliever on this list, Rogers has just one year remaining on his contract and the Minnesota Twins would be wise to see what’s out there this winter, given the state of the reliever free-agent market.

Over the past five seasons, Rogers has been one of the most reliable and dominant lefty relievers out there, posting a 2.95 ERA and striking out over 10 batters per nine innings since the start of 2017.

The Jays aren’t desperate for a southpaw thanks to Tim Mayza’s emergence, but there’s definitely an appetite to find another high-leverage option to pair with Jordan Romano at the end of games.

The Chicago Cubs are just about finished the process of selling off every piece that helped them win the World Series back in 2016 and Hendricks is the next to go.

While his ERA jumped to a career-high 4.77 this past season, there’s still a very capable back-end starter here, especially if the trade price is suppressed enough coming off a poor year.

With two years left on his deal at $14 million apiece — plus a club option for 2024 at $16 million — teams will have to decide if they’d rather trade for Hendricks or sign a starter like Steven Matz for a similar price.

It’s hard to figure out what the Colorado Rockies front office is doing at the best of times, but there’s no doubt Marquez is their best trade chip remaining.

Owed $26 million over the next two seasons — plus a $16-million option for 2024 — Marquez’s price would be similar to the one the Jays paid to pry Berríos away from the Twins in the summer.