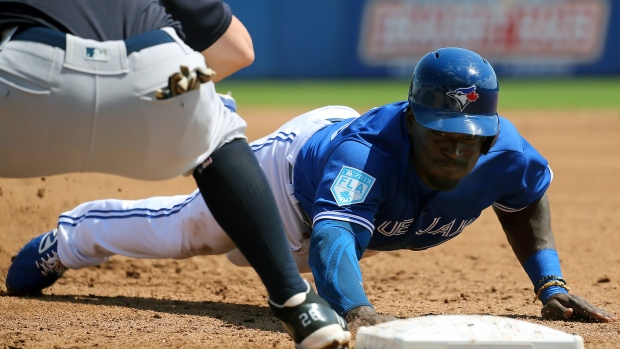 DUNEDIN, Fla. — If you need an example of how quickly things can change, just go back to last year when the Toronto Blue Jays made the short trek north to face the New York Yankees at George M. Steinbrenner Field in Tampa early on in the Grapefruit League season.

A year later, Stroman resides in Queens with the New York Mets, Tulo is retired, and the Jays are a completely revamped group littered with kids and a new staff ace.

Everyone knows the drill this time of year: Don’t put too much stock into spring training results.

But every year people get excited over unexpected performances, and jobs are won and lost.

Heading into Saturday’s Grapefruit League opener against the Yanks in Tampa, here are five players to watch in the early going: 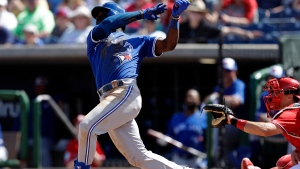 Now that he can’t be sent to the minor leagues without being exposed to waivers, it’s now or never for Alford.

Safe to say, that kind of production isn’t going to keep you in the majors.

Luckily for Alford and the Blue Jays, the addition of a 26th roster spot will likely buy them some time in trying to turn the toolsy former football player’s career around, but he can’t waste any time this spring.

Similar to Dalton Pompey last year, Alford will be given ample opportunity in the early going to stake claim to a roster spot. 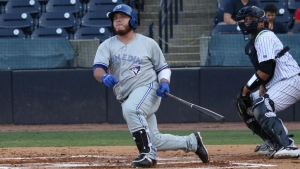 The portly catcher is one of the more intriguing players in camp, simply because of his rotund body type and ability to get a barrel on a lot of baseballs.

Even though he does not look like a major leaguer, there’s belief he could hit like one at some point soon, evidenced by the .315 career batting average across three minor-league seasons.

He’ll get a chance early, as he’s expected to start Sunday’s game against the Minnesota Twins.

The early returns on his receiving and ability to control the running game are positive, but the blocking lags a bit behind.

The bat is what’s going to get him to the major leagues, and maybe soon.

The chances of breaking camp as a 21-year-old are slim to none, but if Kirk can make an impression on manager Charlie Montoyo and catching coach John Schneider this spring, his name could appear in call-up conversations later this summer if he finds success against Double-A pitching.

The last player of consequence the Jays called up straight from New Hampshire was Lourdes Gurriel Jr. in April of 2018. 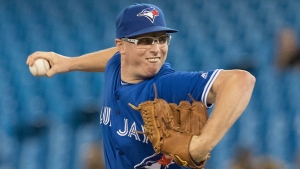 Montoyo revealed his early rotation this week, and it’s Thornton getting the ball first against the Yankees on Saturday.

Seen as the current front-runner for the fifth rotation spot, Thornton will have to fend off the next two names on this list, but there were flashes of brilliance during his 154.1 innings as a rookie.

Catcher Danny Jansen called him a “motivated” pitcher earlier this week, and Thornton himself has said he’s eager to build on a successful rookie season with so much more information than he had a year ago at this time as a fresh-faced newbie.

Thornton also said he’s been tinkering with new pitches and an altered approach, but wouldn’t reveal exactly what they were for competitive reasons.

The starters will only throw “an inning or two” in their debuts, according to Montoyo. 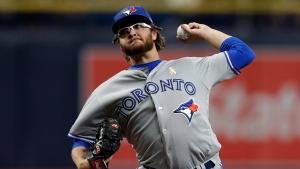 Currently, Kay is slated to be a part of what should be a very good rotation at Triple-A Buffalo, but injuries happen and Kay is probably starting pitcher No. 7 or No. 8 on the depth chart as of today.

He’ll get a chance to impress Sunday on the road in Fort Myers against the Twins.

Making his debut last September, Kay’s ERA was a bloated 5.79 across 14 frames, but the underlying numbers say he pitched a whole lot better than that, keeping the ball in the ballpark, getting 52.3 per cent ground-balls, and striking out 13.

The Jays would love to see the southpaw polish up his command with the Bisons — he walked five, hit a batter, and tossed a wild pitch in his 14 innings — before he eventually pushes his way into the big-league rotation.

Kay registered a 2.50 ERA in seven starts with the Bisons last year after coming over from the Mets in the Stroman trade.

With Ryan Borucki already shut down for the time being due to elbow tightness, Kay is the only healthy left-handed rotation candidate not named Hyun-Jin Ryu. 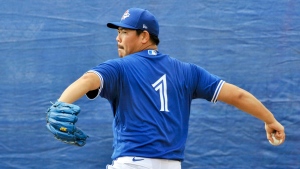 A smidgen behind Thornton, the incumbent, heading into Grapefruit League play, Yamaguchi’s extensive experience as a closer in Japan is something the Jays would love to deploy in the bullpen.

That just might happen if the top four in the rotation stay healthy and Thornton pitches well, allowing Montoyo to use the 32-year-old Japanese right-hander in a variety of roles out of the bullpen.

But there’s a catch.

Yamaguchi prefers to be a starter and the Jays have promised to give him that opportunity. If he’s lights out in the spring, they’ll have a tough decision on their hands if everyone is healthy.

Yamaguchi will start the first game at renovated TD Ballpark in Dunedin on Monday against Alex Anthopoulos’ Atlanta Braves.