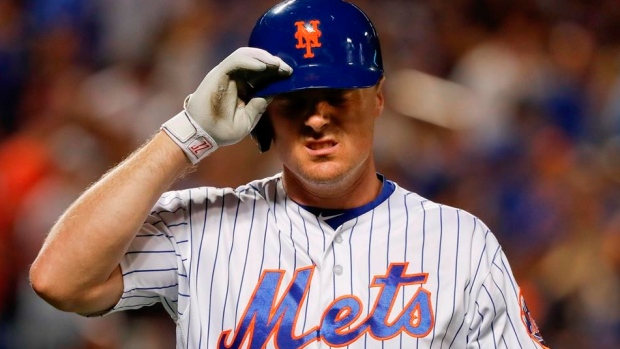 The MLB free agency period is underway. Teams and players alike are looking to make big splashes during the off-season. Check out TSN.ca's rumours blog for all you need to know about MLB free agency.

Circling back for Jay Bruce?

The Toronto Blue Jays had a trade for Jay Bruce fall through last season. They may be looking to acquire Bruce again this off-season.

According to a report from ESPN's Jim Bowden on MLB Network Radio, the Blue Jays have engaged in trade talks for Bruce with the New York Mets. Bowden said Bruce, a left handed bat, could be targeted as an outfielder to platoon with Melvin Upton Jr.

Bowden also added the Jays are still in on left-handed hitting Josh Reddick.

The veteran slugger, of course, has history with the Rangers dating back to his bat-flip in Game 5 of the ALDS in 2015 and his fight with Rangers shortstop Rougned Odor this season.

Bautista is expected to turn down the Blue Jays' one-year $17.2 million qualifying offer and Toronto appears to be out of the long-term deal bidding.

The expiring collective bargaining agreement may have teams waiting until after December 1 - or longer - to sign high-price free agents, Nick Cafardo of the Boston Globe speculates.

The current CBA has a $189 million payroll threshold, which is expected to rise under a new CBA. However, until the figure is set for the 2016 season, teams could remain hesitant to sign players for fear of going over the mark.

Cafardo points out Edwin Encarnacion and Yoenis Cespedes as two players who could be forced to wait until the number is set before they're signed.

There's currently no timetable on when a new a CBA will be signed.

The Tampa Bay Rays are expected to trade one of their starting pitchers this offseason, Joel Sherman of the New York Post reports.

Sherman lists Chris Archer, Jake Odorizzi and Drew Smyly as the most likely candidates to be moved, while there's an outside chance Alex Cobb could be the odd man out.

“I'd say the Pirates are on our short list,” Michael Martini, Holland's agent, told Trib Live on Saturday.