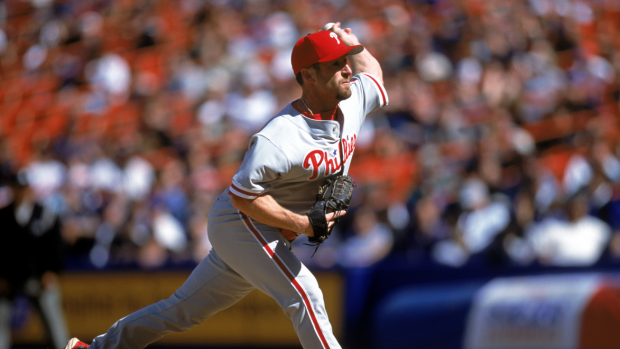 A well-known Canadian hurler is gone.

Rheal Cormier, the Moncton, N.B.-born left-handed pitcher who spent 16 seasons in Major League Baseball, has died at the age of 53, Baseball Canada announced on Monday.

We are devastated to learn of the passing of former National Team player and Canadian major leaguer Rhéal Cormier. Our immediate thoughts are with Rhéal’s family and loved ones during this difficult time. ❤️ pic.twitter.com/i1c4nfgtCp

The Philadelphia Phillies, one of Cormier's former teams, confirm that Cormier had been diagnosed with cancer.

“Rheal was one of the most vibrant people I’ve had the pleasure of knowing. Our time spent together in Philadelphia as teammates was unforgettable. He will be greatly missed but never forgotten”

“Rheal was one of the most vibrant people I’ve had the pleasure of knowing," former teammate Jim Thome said. "Our time spent together in Philadelphia as teammates was unforgettable. He will be greatly missed but never forgotten."

Appearing in 683 games, Cormier had a career record of 71-64 with the St. Louis Cardinals, Boston Red Sox, Montreal Expos, Phillies and Cincinnati Reds from 1991 to 2007. Cormier enjoyed his best season with the Phillies in 2003 when he went 8-0 with a 1.70 ERA, which was the second lowest among relievers and the sixth lowest for a Phillies reliever since 1900.

Cormier represented Canada internationally on a number of occasions, including at the 2006 World Baseball Classic and a pair of Olympic Games - in Seoul in 1988 and in Beijing in 2008, where - at 41 - Cormier was the oldest player in the tournament. He also became a citizen of the United States in 2004.

He was inducted into the Canadian Baseball Hall of Fame in 2012.