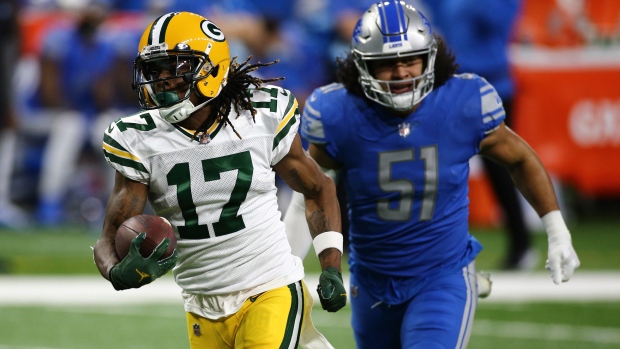 Week 1 wraps up with Monday Night Football on TSN tonight, as the Detroit Lions visit the Green Bay Packers at 8:15 p.m. ET.

Aaron Rodgers and the Packers are fresh off a humiliating 38-3 loss to New Orleans in Week 1, while Detroit fell 41-33 to San Francisco.

Despite Green Bay’s ugly performance, they’re still drawing most of the betting action for this contest. Eighty-seven per cent of the ATS wagers are currently on the Packers, which explains why the line has moved from Green Bay -10.5 to Green Bay -11.5 throughout the week.

Packers aim to bounce back

The Week 1 loss was the worst of Rodgers’ career. He threw for just 133 yards on 28 attempts, was picked off twice, and was pulled in the third quarter along with the rest of the Green Bay starters.

While Jameis was incredible, how about the Saints’ defense?

The 3 points scored by Green Bay are the fewest *ever* in a game that Aaron Rodgers started and did not leave early due to injury.

Just a dominant performance to start the season by New Orleans.

The entire team looked completely out of synch, but if there was ever a spot to bounce back, this is it.

The Lions surrendered 442 yards last week to San Francisco, coughing up 8.0 yards per play. They allowed Jimmy Garoppolo to throw for 314 yards on just 17 completions and yielded 5.8 yards per carry to opposing running backs.

According to Pro Football Focus, only Chicago graded out lower defensively in Week 1 than the Lions, and their pass defence could be even worse on Monday.

Cornerback Jeffrey Okudah, the third-overall pick in 2020, is done for the season with an Achilles injury, which will force rookie Ifeatu Melifonwu into action. Anyone who has watched Rodgers over the years knows there’s nothing he likes more than picking on inexperienced corners.

Rodgers and the Packers downplayed their struggles all week, and he has a strong tendency to rebound in a big way. Last year alone following a loss, he averaged 266 passing yards and four touchdowns, posting a quarterback rating north 132 on all three occasions.

With the exception of a few linemen, including All-Pro tackle David Bakhtiari, this is the exact same offensive group that led the NFL in scoring last season, and averaged 32 points per game at Lambeau Field.

The Lions also enter Monday Night severely shorthanded on offence. Starting left tackle Taylor Decker is on IR, while No. 1 wide receiver Tyrell Williams is in the concussion protocol.

That doesn’t leave new starting QB Jared Goff with many weapons, which has to be good news for a Packers’ defence that’s missing its top pass rusher in Za’Darius Smith.
Playing under new defensive co-ordinator Joe Barry for the first time against the Saints, the unit looked lost. They coughed up five touchdown passes to Jameis Winston, while failing to record a sack or a turnover.

Speaking of lost, that’s exactly how the Lions’ offence looked through two and a half quarters in Week 1, before piling up 23 points in garbage time.

As 11.5-point underdogs in this matchup, oddsmakers are expecting plenty more garbage time for Detroit this week, and if that’s how you envision the game playing out, check out Goff’s touchdown prop.

The former first-overall pick threw for 338 and three scores in Week 1 and is +115 to eclipse 1.5 touchdown passes versus the Pack.

On paper, the Packers are a far superior team, and we should expect them to bounce back, especially on offence.

No team allowed a higher yards per completion then the Lions in Week 1, while Rodgers is 17-5 in 22 career starts versus Detroit.

He threw for 530 yards and five touchdowns against the Lions in 2020, and another big outing is coming on Monday Night.

Pounce on the Packers in the first half, and grab Rodgers over 2.5 TD passes.