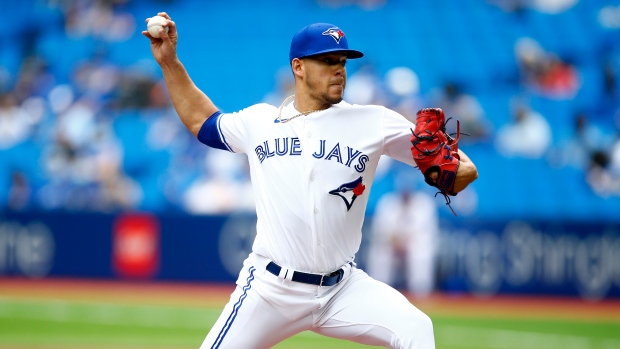 TORONTO — The José Berríos acquisition has sent a jolt of electricity through the Toronto Blue Jays clubhouse.

This is a team full of belief right now.

Coming off a sweep of the Kansas City Royals with a new top-of-the-rotation starter helping to bring out the brooms in his debut, the Jays are a dangerous ball club as August gets underway.

Yes, there’s ground to make up, but there’s lots of time to do it if consistent baseball is on the horizon.

Berríos is a game-changer and suddenly the rotation looks like a strength.

It was impressive that the 27-year-old right-hander was able to go out and focus enough to throw six shutout frames Sunday, considering everything that was going on leading up to his first start in eight days.

Despite his routine being off and landing in a new city Saturday night with the benefit of just a quick prep session with pitching coach Pete Walker, Berríos showed exactly why the Blue Jays front office paid a high price to get him Friday prior to the trade deadline.

“The last three days for me were crazy, a lot of things going on,” Berríos said. “It was different, for sure. I’ve never been in this position in my career. There’s a first time for everything, so we have to handle working around it.

“The guys here gave me a really nice welcome and we had a plan. We gave each other a lot of confidence and we went out there and did our work, so that was fun. And, obviously, we won.”

The curveball is a legit out-pitch and his four-pitch arsenal allows him to routinely pitch deep into games, something that hasn’t been a hallmark of this Blue Jays rotation in recent times.

“I knew what he could do from talking to (Minnesota Twins manager) Rocco Baldelli,” Jays manager Charlie Montoyo said. “He told me everything. He loves this guy. But you know why I’m so impressed about what he did? He was scheduled to pitch for the Twins on Friday, but in the past 48 hours, he had to relocate to another country during a pandemic with all the protocols that go with it, meet new teammates and coaches, and get mentally ready for a start to face a team he’s faced many times. I’m so impressed with what he did.”

The question with Berríos isn’t how good is he? Really, it’s how good can be become?

Many think there’s another level to be reached and he’s just now getting to the age where many with elite stuff figure out how to pitch.

“You always have a chance to improve yourself day-by-day and we learn something from every person you meet in life,” Berríos said. “Now I’m here with a new group, new people and open to learn and work together and try to make a lot of good things for myself and the team.”

The thing to watch is his pitch mix.

A suggestion: Even more curveballs, a lot more changeups, and far less four-seamers.

The Jays sent veteran righty John Axford to the Milwaukee Brewers in exchange for cash on Monday, a rare minor-league post-trade-deadline trade that’s still allowed even with the August waiver trading period being no more. Axford was pitching well at Triple-A with the Buffalo Bisons during his comeback attempt, but the Jays didn’t feel he’d be able to earn a spot on the 40-man roster, so they shipped him back to the spot where he made his MLB debut way back in 2009 and he’ll join the big-league club there … Designated for assignment on Friday, reliever Tyler Chatwood cleared waivers and was released … Santiago Espinal earned his sixth straight start at third base Monday and it’s deserved. Since June 10, across 76 plate appearances and 18 starts, the 26-year-old is slashing an impressive .397/.461/.544 with two homers, four doubles and more walks than Ks (8:7). He’s their best option at the hot corner by far right now … Hyun Jin Ryu will pitch Tuesday on regular rest because he wanted to be lined up for an important Sunday start against the division-rival Red Sox … It’s very likely Berríos and Robbie Ray will split Saturday’s double-header against the BoSox, but the Jays have options with their six-man rotation later this week … Catcher Danny Jansen is slowly recovering from his second hamstring injury of the season, but he’s not going to be rushed and isn’t likely to return until at least the end of the month … Catching prospect Gabriel Moreno (fractured thumb) is likely to end up finishing his season at Triple-A when he returns to health. Moreno still isn’t swinging a bat, but he’s getting closer to full baseball activities. If Moreno can perform in a tiny sample at Triple-A, it’s not crazy to talk about him breaking camp with the big club next March, even if it’s very likely a mid-season promotion is in the cards.

When you add up the 101 games in a row he was in the lineup for this season and the full 60 he played last season, Vladimir Guerrero Jr. played oh-so-close to a full 162-game schedule before finally get his first day off Sunday afternoon.

The load management he needed during his rookie season in 2019 is officially a thing of the past.

Even with muted production in 2020 compared to his massive breakout this season, Vladdy has put up some ridiculous numbers across those 161 games, slashing .303/.390/.582 with 42 homers.

Guerrero is still firmly in the hunt to be MLB’s first triple crown winner since Miggy Cabrera in 2012.

“Everybody's looking at each other like, 'Man, I've got the chills. I'm holding back tears.’ It’s hard to explain the feeling. We've just kind of been trying to pretend like we had a home and it's difficult to do for two years, so when we finally come back here, it feels like definitely a big weight off our shoulders.”
—Bo Bichette after Friday’s game, the first at Rogers Centre in 670 days

THE CALL-UP LIST
Five players closest to a promotion to the big leagues when a need arises:

1—OF Corey Dickerson, 10-day IL: Close to returning from a foot injury he suffered with the Miami Marlins in June before being traded to the Jays, Dickerson played in his fourth rehab game with the Bisons on Sunday afternoon and was in Toronto taking BP on Monday. He’s close to giving Montoyo an extra lefty bat off the bench.
2—RP Tayler Saucedo, Triple-A: The lefty acquitted himself well during a 15-appearance cameo, registering a 2.03 ERA across 13.1 innings before being demoted Sunday to make room for recently-acquired veteran Joakim Soria.
3—SP Thomas Hatch, Triple-A: Berríos’ arrival allows the Jays to keep Hatch stretched out as rotation depth at Triple-A for now.
4—RP Nate Pearson, Triple-A, 7-day IL: Jays GM Ross Atkins said Friday that Pearson should be pitching in games out of the Buffalo bullpen soon. If he’s over the sports hernia and can stay healthy for a couple weeks, he’ll be in the big-league 'pen soon.
5—3B/SS Kevin Smith, Triple-A: He without a doubt deserves a promotion and a chance to show his big season with the Bisons is no mirage, but being off the 40-man roster makes it tough for now.

PROSPECT SPOTLIGHT
Highlighting one player in the system that you need to know about:

3B/SS Orelvis Martinez, Low-A Dunedin
Even though he finished the month on an 0-for-11 skid, Martinez’s July was one for the ages.

He’s simply too good for Low-A and likely won’t be there long, as a number of long-awaited promotions usually start happening after the trade deadline comes and goes.

One of his recent homers checked in around 109 mph off the bat — his top exit velo homer is 110 mph — and the power just comes easy and natural.

The two areas of focus right now are cutting down on the strikeouts — he’s whiffing a manageable 25.8 per cent of the time in 322 plate appearances — and figuring out a long-term home defensively.

Through 70 games, Martinez has started 44 at shortstop, 12 at third base and 14 as the designated hitter.

The hot corner is the likely landing spot once he reaches the majors.

No matter how he finishes the season, Martinez is going to be a top-two prospect in the system when I get to the yearly top 50 Jays prospects in the winter.

For more on Martinez, check out my spring training sitdown with him here.