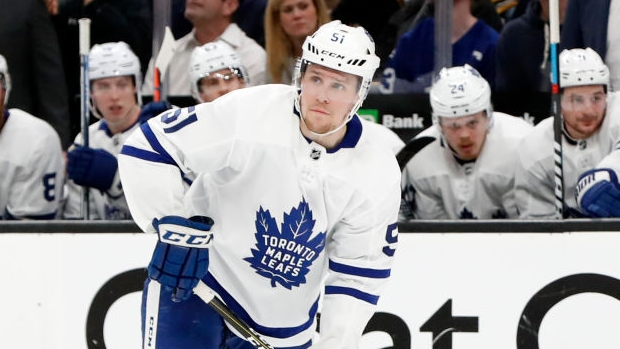 The Montreal Canadiens made a contract offer to defenceman Jake Gardiner during the off-season, general manager Marc Bergevin confirmed to reporters at the team's annual golf tournament on Monday.

Bergevin did not provide any other details about trying to sign the free agent, who would have bolstered the left side of Montreal's blueline and power play.

The 29-year-old had three goals and 27 assists while playing 62 regular-season games with Toronto last season and added two assists in seven playoff games. He has 45 goals and 200 assists during his eight-year NHL career, all with the Maple Leafs.

In a sit-down interview with RDS over the weekend, Bergevin also made it clear that the club has no interest in bringing back former defenceman Andrei Markov, who is 10 NHL games away from reaching the 1,000-game benchmark.

"Two years ago, his contract was due, we made an offer," said Bergevin. "Efforts were made to sign it and he chose another direction that was KHL. It was two years ago.

"Since that time, things have changed. The player has aged. The organization has changed direction. We have a lot of young people growing up. I will name them. (Noah) Juulsen, (Victor) Mete, (Josh) Brook … (Alexander) Romanov, who will be here in a year. Then, we really want to give our young people a chance."

Bergevin also told reporters that the team has had talks with forward Max Domi, but would not reveal additional details. Domi, a restricted free agent with arbitration rights next summer, tallied a career-high 28 goals and 72 points last season.