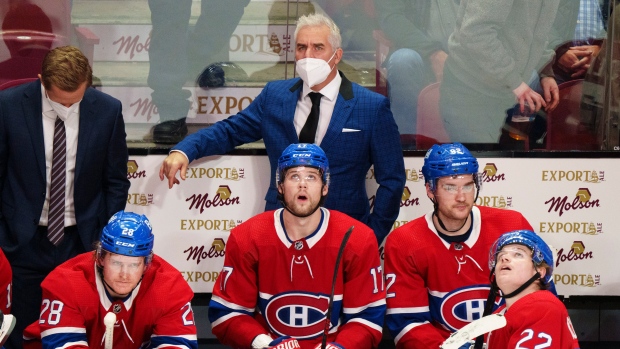 In his introductory news conference as the new executive vice president of hockey operations Friday morning, Jeff Gorton confirmed that Dominique Ducharme will continue as head coach of the Montreal Canadiens for the remainder of the 2021-22 season.

Asked by @GagnonFrancois in the final question of the news conference if Dominique Ducharme was safe as coach for the rest of the season, Jeff Gorton said, ``Yes.''

The Canadiens have struggled so far this season, sitting second-last in the Atlantic Division with a 6-17-2 record through 25 games.

Ducharme, who replaced Claude Julien midway through the 2020-21 campaign, coached the Canadiens to their first Stanley Cup Final since 1993 last season and signed a three-year contract extension in July.

The organization made sweeping changes in the management department on Sunday as general manager Marc Bergevin, assistant GM Trevor Timmins and Paul Wilson, senior vice president of public affairs and communications were all let go with assistant GM Scott Mellanby resigning on Saturday.

Gorton said that while he was just getting started with the team, he expects to have a new general manager in place sometime after Christmas. Some reporters asked him about the possibility of bringing in Canadiens legend Patrick Roy, who expressed his interest in the job earlier this week.

"I've heard of him, yes," he answered reporters with a smile. "I have a tremendous amount of respect for him for what he's done in hockey and I know he's an emotional guy who speaks his mind. We'll look at everyone."

In his own new role, Gorton made a point to outline the need for improvement in player development and analytics.  “We need to build that out better," he said. "We need to modernize it. I believe in it.”