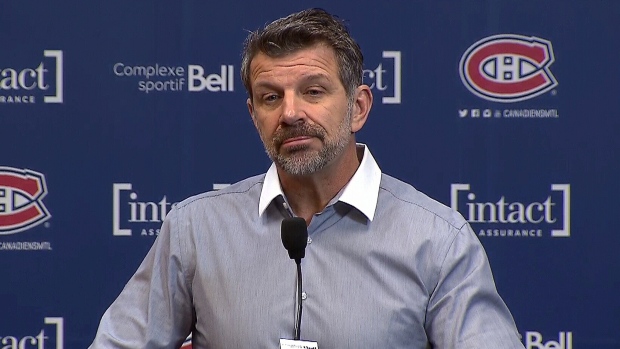 There was plenty of offer sheet speculation surrounding last summer's class of restricted free agents, much of it revolving around the Montreal Canadiens, who were unsuccessful in using one to land Carolina Hurricanes centre Sebastian Aho.

However, general manager Marc Bergevin put an end to those rumours on Friday, saying he didn’t try to offer sheet forwards Mitch Marner and Brayden Point.

"I'm going to be straight forward and say no," he said when asked about both players by TSN Radio 690's Tony Marinaro. "I made one offer sheet [Aho] and that's it."

Bergevin and Marinaro: 1-on-1

The Canadiens tendered a five-year deal to Aho on July 1 that carried an $8.454 million cap hit and more than $21 million in signing bonuses for the first calendar year. The Hurricanes matched the offer less than a week later.

While Bergevin didn’t make any significant moves to his roster over the summer, one name that kept coming up with him was highly touted goaltending prospect Cayden Primeau.

"I've received calls in the past, yes," he told TSN Radio 690. "A few. Unless you offer me a number-one centre around the league, which is not going to happen."

With the Canadiens' season opener less than a week away, the team appears set with working with the core group of players they have, including winger Jonathan Drouin. The 24-year-old was another player being bandied about in trade speculation until Bergevin downplayed it with reporters on Thursday.

"I'm not saying 'make or break,' but I've talked to Jo and he's looking to be more consistent in his game," he told Marinaro on Friday. "And that's what we're looking for and that's what I hope we'll be able to get from Jo this year."

Bergevin is no stranger to making big trades and the 2016 summer blockbuster he made acquiring Shea Weber from Nashville for P.K. Subban is still a hot topic in Montreal three years later. Bergevin said he has no regrets about making that deal.

"We changed the culture of our team," he told Marinaro. "We brought in a player who's not only well-respected in the Montreal locker room but around the league. He's got a presence, people look up to him.

"I don't know if you know Shea personally, but he's one of those guys who leads by example – on and off the ice."